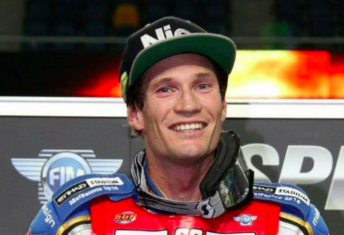 Jason Doyle’s hopes of securing the FIM World Speedway Championship are over after being ruled out of the final round in Australia through injury.

The Newcastle rider was hospitalised with a dislocated shoulder, punctured left lung damaged right lung and a shattered elbow following a nasty crash during the Polish round of the championship last Saturday.

After losing his championship lead to Greg Hancock, Doyle had hoped to recover in time for the season finale at Melbourne’s Etihad Stadium on October 22.

However, Doyle has revealed the extent of his injuries via his Facebook page with the 30-year-old awaiting surgery on his elbow in hospital before he is allowed to fly.

Motorcycling Australia has since confirmed that the New South Wales rider will be replaced by countryman Sam Masters.

Masters, who was entered as a wildcard in the event last year, will join Australian riders Chris Holder and wildcard Brady Kurtz.

“I would like to let everyone know first hand from me that sadly I have to withdraw from the Melbourne GP,” read a post on Jason Doyle’s Facebook page.

“I have punctured my left lung and badly traumatised my right lung.

“My right elbow is also shattered and I dislocated my left shoulder.

“I am unable to fly due to my lungs and have to wait for surgery on my elbow once my lungs are healed.

“I would like to again thank everyone for their kind messages I have got time to read them all! I will concentrate on my health and recovery to be ready for 2017.”