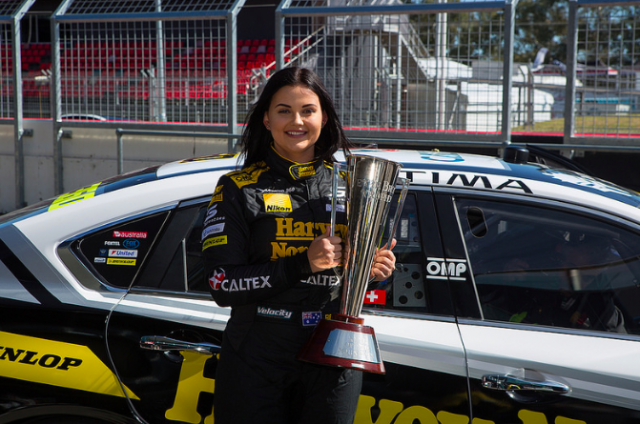 Renee Gracie is hopeful that a strong showing at this weekend’s Supercheap Auto Bathurst 1000 will help secure a deal to return to the Dunlop Series.

The 21-year-old has split with Paul Morris Motorsport’s Dunlop Series outfit ahead of Bathurst and is yet to finalise a seat for 2017.

As previously reported, Formula 4 racer Jack Smith will this weekend fill the vacated seat in the Ford Falcon FG she had campaigned across the opening five rounds.

Gracie is fully focussed on her Harvey Norman Supergirls Bathurst 1000 wildcard this weekend, where she will pilot a Nissan alongside Swiss racer Simona de Silvestro.

However, negotiations are underway to secure a drive in a Car of the Future chassis for the Sydney Olympic Park Dunlop Series finale and for 2017.

“We are working on something for Sydney to set ourselves up for 2017,” Gracie told Speedcafe.com.

“Hopefully once this race is done we will convince some people to come on board after a good result and sort something out.”

Gracie admitted it was a difficult decision to step away from her Dunlop Series campaign, but is convinced the move will allow her to extract the most from her Supercars wildcard.

“I have left my Dunlop Series car for this weekend because last year I realised I perhaps wasn’t 100 percent focussed on the task, even though I thought I was,” she said.

“It was double everything in terms of driver briefings, practice sessions and races so it was really tough and there needed to be about three of me to cope with the weekend.

“I’ve decided to really focus on this (Bathurst 1000) and see what I can get out of it.

“Last year we didn’t do one debrief together with Simona (due to her commitments), it was all over the phone.”

Gracie and de Silvestro finished 21st in last year’s Great Race after losing several laps when the Australian crashed during the opening stint.

The Supergirls entry has switched from Prodrive to Nissan this year, providing a new challenge for the drivers ahead of the race.

“Simona and I doing the same time shows we are both at the same comfort level,” said Gracie.

“We have got the laps, the experience, the car and the knowledge of what we need to do and where we need to improve, so there is a lot less to worry about compared to last year.

“We have got a lot more time to work together this year and I think it is going to help in the long run.

“I haven’t really thought about the result. If we got 17th or 18th I would be lost for words because it would just so cool to finish.”