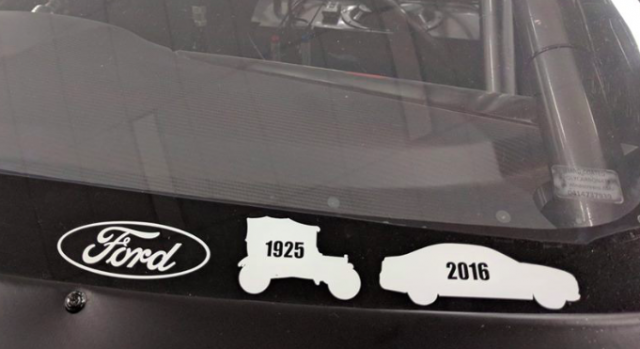 The Ford stickers will run at the base of the windscreen

DJR Team Penske will mark the end of Ford’s local manufacturing on Friday by running tribute stickers on its Falcons at the Supercheap Auto Bathurst 1000.

The stickers on the base of the windscreen show the outline of a 1925 Model T and a modern day FG X Falcon to signify the first and last cars assembled by Ford in Australia.

Ford is not financially involved in Supercars teams DJRTP or Prodrive, but permits its logos to be used on the teams’ cars and merchandise.

Although Ford’s decision to close its operations on the same weekend as Bathurst has been widely criticised, Johnson says that helping workers find new employment is the most important aspect of the shutdown.

“We wanted to do something to pay tribute to all of the people who have worked at Ford Australia over the years,” Johnson told speedcafe.com of the tribute.

“Obviously Ford have set the (closure) date around whatever else they have planned and it has just happened to coincide with Bathurst.

“But it’s good to see that Ford have done the right thing by its workers. A huge percentage have jobs elsewhere, which is pleasing to see.

“Losing manufacturing here is just a sign of the times unfortunately. I remember back in the ‘80s when Ford had assembly plants in every state.”

Despite strong ties to a wealth of other marques in the United States, Penske has elected to remain with Ford in Supercars for 2017.

Although such decisions are now out of his hands, Johnson says he’s pleased to be continuing with the Blue Oval.

“We still get a little bit of support from Ford and will definitely be running these cars next year,” said Johnson.

“The manufacturer side is up to Penske now, but personally I’m happy to be sticking with Ford.

“If we changed I don’t think you’d see me at many more race meetings because I think the punters would lynch me!

“The same goes with Shell, who have been a part of what we do for a long time (and will sponsor both cars full-time in 2017).”

DJRTP’s Fabian Coulthard/Luke Youlden and Scott Pye/Tony D’Alberto entries are both being touted as dark horses for victory at Bathurst.

The team is winless since mid-2013 but has shown flashes of speed throughout the season to date.

“We had a fair bit of speed at Sandown on the soft tyre and normally we go better on the hard tyre,” said Johnson.

“So we’re really looking forward to tomorrow and seeing how we go.

“Strategy has been a bit of an Achilles Heel for us but I’m sure the team has had plenty of briefs and debriefs.

“At the end of the day if you can’t make your own strategies work you’ve just got to follow the leader.”