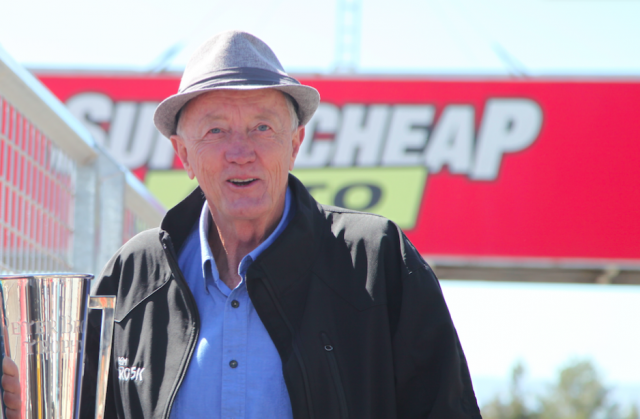 Peter Brock would have been fine with an upcoming telemovie debunking the myth that he was ‘Peter Perfect’, says his brother Phil.

Phil Brock will play a key part in tributes to the nine-time Great Race winner at this weekend’s Supercheap Auto Bathurst 1000, 10 years on from the legend’s death.

The anniversary has coincided with the making of a two-part telemovie ‘Brock’, which will screen on Network Ten this Sunday and Monday nights.

A dramatised story, the telemovie explores various aspects of Brock’s life off the track including the allegations of domestic violence against his second wife Michelle Downes.

“I’m not worried about it at all,” Brock, who is yet to view the finished product but has spoken with its producers, told Speedcafe.com.

“He hated being called Peter Perfect because he wasn’t perfect, so i think he would be fine with it (the making of a telemovie).

“It was a different world then too and there were things that happened over that period that were known about by journalists and other people that never got to the public view.

“You don’t want it (the telemovie) all fluffy and perfect, because he certainly did some things wrong.

“I’ve spoken to one of the producers and I’m confident that it’ll be very good.

“There will be some artistic license, but that’s fine.”

Despite the complexities of his brother’s private life, Phil says that Peter’s belief in the Energy Polarizer is the topic that will be most highly debated.

Brock’s insistence on fitting the crystals to his Holden Dealer Team road cars in 1987 quickly brought about a divorce with Holden and the end of his business.

“I think the Polarizer was the biggest thing for Peter that, even now, it’s something that’s open for ridicule,” said Phil Brock.

“Peter believed it, clearly, and I think part of that was the influence of Bev (Brock) and (Eric) Dowker (friend and chiropractor introduced to Brock in the mid-1980s).”

Phil (played by Ben Hall) is included in the telemovie, with the storyline focussing on friction with his brother at Bathurst in 1983.

The early demise of the #05 Peter Brock/Larry Perkins entry in that year’s race saw the duo take over the sister #25 John Harvey/Phil Brock car, which had been started by Harvey.

Phil Brock was subsequently denied a chance to drive the car and share in the victory.

Reflecting on the matter today, Phil says he felt Peter ultimately responsible for the decision.

Phil left his position at the HDT early the following year before moving to Queensland.

“My disappointment with ’83 was that there were three people involved in the decision making,” he reflected.

“The decision was between Peter, John Harvey and Larry Perkins, but Peter being the owner of the team had the final say.

“The bit that hurts me was that Larry was the slowest of the four of us. He should never have been in the car.

“He made the decision as a lead mechanic, but either Peter or John should have said ‘no, Phil is driving with us’.

“I didn’t know until reasonably late in the race that I wasn’t going to be driving.

“I never really spoke about it with Peter or John, but it doesn’t really matter now.

“For Peter to have chosen me to drive with him on three occasions, particularly the first time (1976) when I’d done very little driving, to do that was pretty darn special.”

Phil Brock will drive a replica of the #25 Holden during Sunday’s morning’s tribute to his brother which will also include the 11 previous winners of the Peter Brock Trophy.

CLICK HERE for more on the drivers and cars that will take part in the parade.

CLICK HERE for Speedcafe.com’s review of the Brock telemovie.