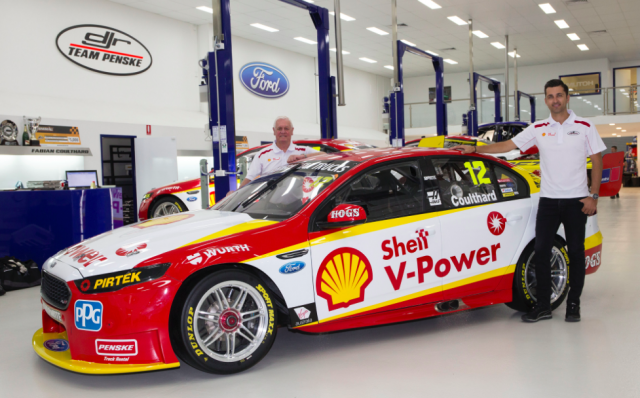 DJR Team Penske has confirmed a move away from its rolling sponsorship model for next season thanks to a new multi-million dollar deal with Shell.

Both its Scott McLaughlin and Fabian Coulthard driven entries will race with primary Shell V-Power branding for the full 2017 season.

The deal has been announced in the lead-up to Bathurst, where Shell V-Power will also be the primary sponsor of both Penske Fords.

Penske had been rotating sponsors across its cars at almost every race since joining the championship at the start of last year.

The model was said to be key to promoting Penske’s other business interests within Australia, which had been the motivating factor behind joining Supercars.

Shell had been among the brands rotated across the cars, rejuvenating a partnership with DJR that had seen its two cars run in the oil giant’s colours from 1987 to 2004.

Roger Penske, who will attend Bathurst for the first time this weekend, is expecting big things from his team next year.

“Our number 17 and number 12 Fords will proudly carry the Shell V-Power primary branding for the foreseeable future,” said Penske.

“With a strong driver line up we believe our third year in the Supercars Championship will continue our move up the grid.

“The increased partnership from Shell with DJR Team Penske means the Shell brand will once again have a significant presence in Australian motorsport, so it is only fitting we announce this partnership as we head to Bathurst, Australia’s most iconic motorsports event.”