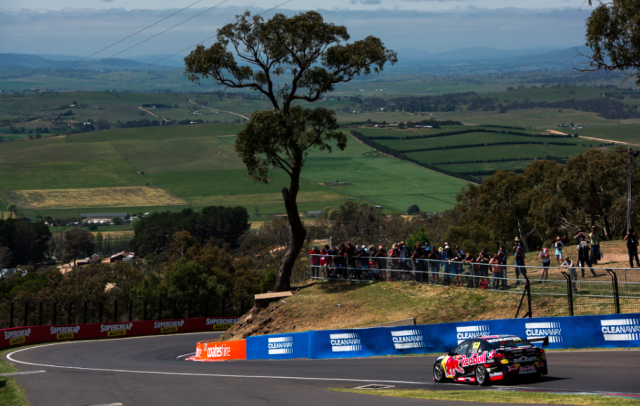 Lowndes and Richards took the prize in 2015

This week’s Pirtek Poll wants to know who you think will win the 2016 Supercheap Auto Bathurst 1000.

Holden powerhouse Triple Eight will undoubtedly be hard to beat on the Mountain, but picking a favourite from its trio is no easy task.

Jamie Whincup and Paul Dumbrell showed stunning form at Sandown prior to their mid-race penalty and are looking for their first Bathurst win since 2012.

Shane van Gisbergen meanwhile already has a Bathurst win to his credit this year courtesy of the 12 Hour and looms as a major threat alongside Alex Premat.

Craig Lowndes and Steven Richards are the reigning Bathurst winners and, despite a tough Sandown, will also be right in the thick of the battle.

Those lining up to knock off Triple Eight are led by Prodrive and the Holden Racing Team.

The Ford squad has finished first or second in each of the last four years, but its reigning champion Mark Winterbottom has struggled for car speed at Sydney Motorsport Park and Sandown.

The Holden Racing Team however is starting to hit its straps following a rough run through the majority of the season, catapulting into Bathurst contention with a fine win at Sandown.

Dark horses for the race include Tekno Autosport, DJR Team Penske and Volvo, while the likes of Nissan and Brad Jones Racing could also throw up a surprise result.