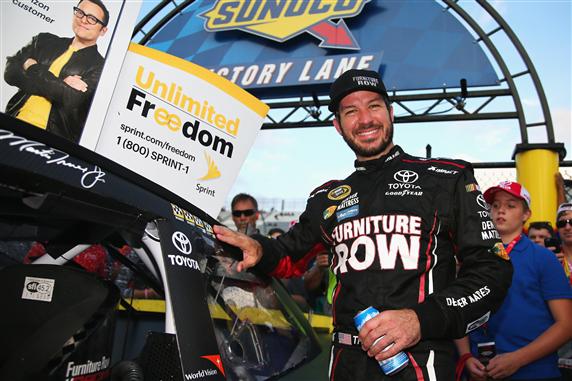 Martin Truex Jr. has scored his second race win in the Chase for the Sprint Cup with victory at Dover.

Truex, who also won the opening race of NASCAR’s version of the playoffs at Chicagoland, dominated the track known as the ‘Monster Mile’. The Toyota driver led 187 of the 400 laps, as the pace the front was so hot only six cars finished on the lead lap.

Despite being a single-car team based in Denver, the Furniture Row squad, which includes Australian race engineer Peter Craik, is considered as one of the hot favourites to take the title.

“We are not messing around I guess – what else can I say – we are here to get it done,” said Truex Jr.

“Especially here, I love this race track as it’s been considered a home track as I have won here before and also had plenty of heart break.

“What an awesome race today and we are ready to go to Charlotte (next week). The last month and half has been ridiculous, I mean it has been a fairy tale dream.

“Let’s keep this momentum going as the sky’s the limit for this team.

With the race being the first cut-off in the Chase the drivers not advancing are the Ganassi entries of Kyle Larson and Jamie McMurray, Chris Buescher and retiring legend Tony Stewart.

McMurray’s day ended with engine failure, while Larson battled electrical issues and a puncture. A 13th place finish for Stewart ending any hopes of a fairy-tale ending to his NASCAR career.

The next phase of the Chase with 12 drivers gets underway at Charlotte Motor Speedway. Last time out at that track Truex completely dominated the Coke 600 back in May.