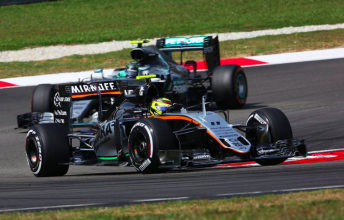 Sergio Perez will continue to drive for Force India next season after confirming a new deal with the British operation.

The Mexican driver had emerged as a key player in the silly season having been linked to a move away from the Silverstone team, with Renault and Haas F1 reported to be possible destinations.

Perez had penned a new deal for 2017 with Force India earlier this year but confirmation of his extension was subject to commercial agreements being reached.

After receiving the green light from his Mexican backers during the Malaysian Grand Prix weekend, the 26-year-old is now set for a fourth season with Force India next year.

Perez is lying eighth in the championship on 74 points after a campaign that has yielded third place finishes at Monaco and Baku.

“I’m pleased to confirm that I will be racing with Sahara Force India in 2017 as the team and my supporters have concluded their agreements,” said Perez.

“I’m very happy with this team and I have a good feeling for the future. I’ve seen the progress we’ve made over last couple of years and I’m sure we have the potential to achieve even more going forward.

“The team knows me well and it’s important to have stability, especially with some big rule changes planned for next year.

“I’m excited for the rest of this season and for the challenge that awaits all of us in 2017.

“I thank all the team for believing in me and I will do my best repay their faith with points, podiums and hopefully wins.”

Perez will race alongside Nico Hulkenberg in an unchanged line-up at Force India next season.