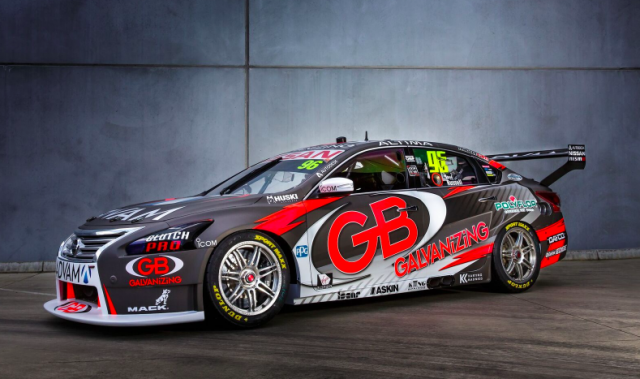 The Dale Wood/David Russell Nissan is the latest Supercar to receive a new livery ahead of this weekend’s Supercheap Auto Bathurst 1000.

Nissan Motorsport has revealed a matte grey look for the GB Galvanizing backed Altima, replacing the largely white scheme seen prior to the recent Sandown retro round.

The move replicates the colourscheme ‘reversal’ that was undertaken by the GB Galvanizing entry, then run as a Brad Jones Racing Holden, before Bathurst in 2014.

Wood qualified third fastest ahead of the Top 10 Shootout that year in what was arguably his most impressive Supercars performance to date.

Currently 21st in this year’s championship after an 18th alongside Russell at Sandown last month, Wood is hoping for a repeat of his 2014 Bathurst form.

“After seeing the Sandown retro livery come to life, the boys at GB were keen to try a reverse livery for the rest of the year,” said Wood.

“It’s always nice to go to Bathurst with a new, fresh look and hopefully with that comes some awesomeness.

“I don’t think I’ve ever been this excited to go to Bathurst before.

“Pulling into the town on the Tuesday always gives some goosebumps.

“From there, you know you’ve got a big week coming up and it’s just a case of head down and getting on with it.”

Nissan will have two new liveries at Bathurst after yesterday revealing its 1991 tribute colour scheme for Michael Caruso and Dean Fiore. Wood and Russell are pairing for the first time this year