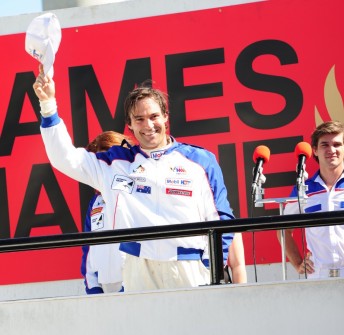 Lead actor Matt Le Nevez insists that he has gone to great lengths to portray Peter Brock honestly in a two-part miniseries about one of Australia’s most worshipped racing drivers.

Le Nevez is well aware that motor racing fans will ruthlessly pick away at certain aspects of the telemovie, however he says remaining true to the character was of paramount importance.

While the production, carried out by Endemol Shine, touched on certain controversies including his turbulent marriage to former Miss Australia Michelle Downes and the energy polarizer fiasco, Le Nevez said the emphasis was not on sensationalism.

From the beginning of filming, Le Nevez said there was a common thread to portray the Brock story honestly and avoid simply being an ‘impersonator’.

“I think there is a lot of heart in this story,” Le Nevez told Speedcafe.com.

“I feel we have represented him in a way we are very proud and very proud to try and share his legendary status and this icon of Australia to a whole other generation of fans.

“In this production we were not interested in trying to sensationalise anything.

“We are not here to disturb his legacy and piss on his grave mate.

During the rehearsal period, Le Nevez sat down with director Geoff Bennett to thrash out a strategy for the lead role.

“Geoff (Bennett) who just happened to shoot a documentary about Wayne Gardner in the 1980s and I sat down and discussed things,” Le Nevez explained.

“Let’s try and get the essence of this man and share this story with the greater Australia’.

“I think that’s what we have achieved.”

Throughout filming, the 37-year-old Canberra-born actor said he was fully focussed on protecting the integrity of Brock.

“Especially when you’ve got the lead actor going from 27 to 61 years of age. I fought very hard to have the integrity right,” Le Neves said.

“I really stood up for what he believed in and hopefully that shows. You can’t please everyone but having said that you really want to share his story with everyone.”

Nevez said there are always compromises in film projects, outlining some of the challenges while shooting Brock.

“Whenever you make a film you always have to make compromises. It’s the nature of film-making,” Nevez said.

“You might have six weeks and you are for example filming the year that he won when it’s raining.

“Then you go out to the day when you’ve got the racetrack and its 45 degrees and there is not a cloud in the sky.

“You have to figure out a way. You can get a rain machine but by the time the rain hits the ground its already dry.

“We’ve been lucky enough to get some amazing footage, really unique footage from fans and some quite interesting avenues.

“There are certain things we had to make for instance when he first went to Bathurst in 1969, he had a goatee.

“The day that I was filming I had a goatee when I started.

“But when we didn’t have the racetrack for the first week of filming we had to shoot some other stuff because one of the other actors had to leave the country where I had to be Peter when he was 45. So you can’t keep the goatee.”

Le Nevez said that he was nervous when he watched the two-part series for the first time last month.

“I was very nervous to be truthful,” Nevez said.

“I’m usually pretty nervous when I see things and a bit freaked out.

“Looking at yourself back is always a bit of a challenge but I’m quietly proud of what I saw in my preview.

“He casts a very, very long shadow Peter Brock, that I don’t think I can stand alongside.”