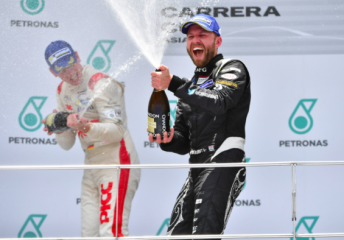 The New Zealander, who will make his Bathurst 1000 debut for Erebus Motorsport this week, completed a perfect weekend as he converted pole position into a race victory from Nico Menzel.

Australia’s Mitchell Gilbert had finished third on the road before receiving an exclusion from the results for an incident earlier in the race, handing Zhang Da Sheng the final spot on the podium.

It proved to be a crucial race in the battle for the Carrera Cup Asia title as championship leader Maxime Jousse retired from the encounter after contact with Andrew Tang on the opening lap.

Tang was later handed a 30-second penalty for causing the clash with Jousse, dropping him to ninth in the results.

Jousse’s demise saw Menzel take over the series lead as the German driver opened up a 12-point advantage over the Frenchman.

“It was a smart drive. I knew that Chris (van der Drift) wouldn’t get any points, so I knew that I was safe in second place, that I would get full points and get the championship lead,” said Menzel.

“I’m a bit sorry for Maxime, its obviously not the way you want to win the championship, but in the end we get some lucky situations and some unlucky situations.”

The Carrera Cup Asia heads to China’s Shanghai International Circuit for the final round from November 4-6.