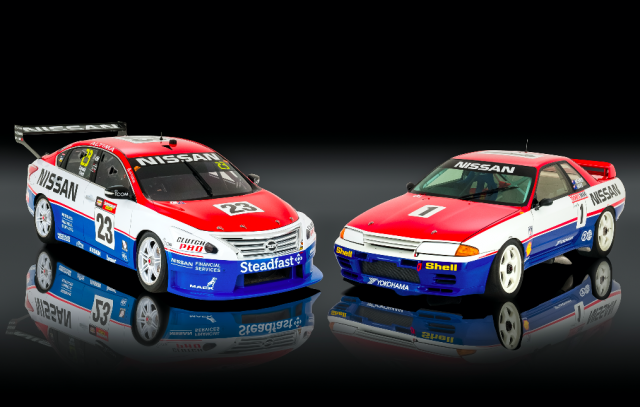 Nissan will celebrate 25 years since the GT-R’s first Great Race triumph with another throwback livery at this year’s Supercheap Auto Bathurst 1000.

While Nissan has run a series of retro liveries since returning to the category in the Supercars era, this marks the first time it has directly utilised the GT-R’s heritage on an Altima.

The #23 Michael Caruso/Dean Fiore entry will carry the colours that were used by Jim Richards and Mark Skaife to record a dominant win in the 1991 Tooheys 1000.

CLICK HERE for a full gallery of images of the GT-R and its Altima counterpart.

“It’s definitely the Nissan livery that I’ve been looking forward to the most,” said Caruso.

“There’s no doubt about how important and how successful the GT-R was and to have the same colours on my car at Bathurst is something very special.

“We’re going to Bathurst with the best chance for success we’ve ever had.

“In the four years since Nissan has been back in Supercars, this has been my strongest year.

“We’ve had a race win and a couple of podiums, so hopefully we can go to the mountain and do what it takes.”

The Skaife/Richards pairing led every lap at Bathurst on the way to victory, setting a race record of 6 hours, 19 minutes and 14.80 seconds that stood until 2010.

Skaife also took pole and recorded the fastest lap of the race, albeit achieving the latter feat while attempting to wrestle the team’s second car up the order in the closing stages.

“Twenty five years on and (they are) some of the best memories of my life,” reflects Skaife of Bathurst 1991.

“To win my first Bathurst with a legend like Jim Richards in the Nissan GT-R was just fantastic.

“It was a life changing moment to win the biggest car race in this part of the world.

“The 1991 race was fantastic because we could press on all day.

“It was the fastest race in history at the time and it was just a faultless day by not only the team, but the way the car ran.

“I think it’s a great connection for Michael to run this livery as a consequence of the GT-R and the way the Nissan Motor Company has been long-term supporters of car racing in Australia.

“I love the look of it and I’m sure ‘Richo’ will have a tear in his eye also.”

Caruso and Fiore finished 14th in the recent Wilson Security Sandown 500, taking the flag as the last car on the lead lap.

Opening practice for the Supecheap Auto Bathurst 1000 kicks off on Thursday.