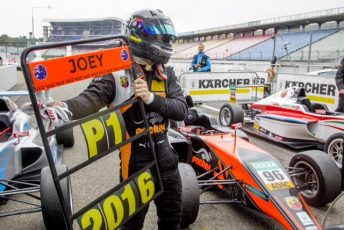 Australian Formula 1 hopeful Joey Mawson has lifted the ADAC German Formula 4 title after scoring a double victory in the final round at Hockenheim.

The 20-year-old from Sydney wrapped up the championship with a victory in the first of three races at the famous German circuit.

Starting from second on the grid, the young Aussie held station in opening five laps of Race 1 before passing Mike-David Ortmann for the lead.

Once ahead, he opened up a six second advantage which he held to the flag.

After incurring a penalty prior to the race Schumacher was forced scythe his way through the field from 23rd on the grid.

The German climbed to fifth before a mistake dropped him back a position at the flag. The result was not enough to keep the championship fight alive, handing Mawson the title. 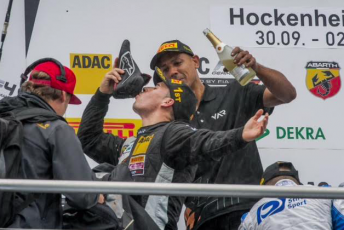 Joey Mawson celebrates his title win with a ‘shoey’

Mawson celebrated the victory in style by copying the ‘shoey’ celebration made famous by Daniel Ricciardo.

“It´s an amazing feeling, simply the best. It still hasn’t quite sunk in,” said Mawson, who hopes to progress to European F3 next year.

“I suppose it will take a few days. I certainly feel that a lot of pressure has come off.

“My team kept quiet about me being in line for the title for the entire race.

“I just blanked out what was going on behind me. It was only when I crossed the finish line that my team told me it was enough.”

Title rival Schumacher was gracious in defeat having enjoyed several wheel-to-wheel battles with the New South Welshman this year.

“Well done, Joey. Congratulations on your title. Our battle will go on,” said Schumacher.

Mawson continued his run of success in the second heat by scoring his 10th victory of the season in a rain interrupted encounter.

The race was briefly red flagged to allow the field to switch from slicks to wet weather tyres.

Mawson was unfazed by the conditions as he took the flag by 0.6s from Thomas Preining and Kami Laliberte-Moreira, while Schumacher was eighth.

The new German Formula 4 champion will start the final race of the season from 10th on the grid later today.