An emotional Daniel Ricciardo was determined not to let another victory chance slip as he ended a two-year drought at the Malaysian Grand Prix.

Ricciardo held second for much of the 56 laps but became embroiled in a hard fought fight with Verstappen in the final stages.

It proved to be an emotional win for the 27-year-old after missing out on opportunities in Spain and Monaco through no fault of his own earlier this year.

Monaco provided arguably Ricciardo’s most frustrating moment of his career when a bungled pitstop cost him an almost certain win in May.

The Red Bull driver, who has finished on the podium five times in the last six races, claimed his last win at the 2014 Belgian Grand Prix

“What a day. It is sinking in now,” said Ricciardo.

“It has been a long time between drinks and only two weeks ago after the Singapore race I said we would win one.

“Since Monaco I kept faith and I believed I could win one this year and we did it.

“I’m pretty emotional, I won’t lie there are a lot of feelings. 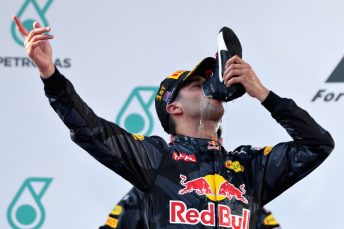 “It was hard but fair and clean with Max. It was fun and that was the best part. I think we can both hold our heads high.

“I was determined to capitalise on the opportunity today. In Barcelona and Monaco I felt I did all I could to get a win.

“I just want to thank Red Bull for making this all possible. Monaco was a hard one to take.

“I think we came through that as a team and we learned a lot and as a person it made me stronger.”

Ricciardo also elected to dedicate his success to his late friend and rival Jules Bianchi, who succumbed to head injuries last year following a crash at the 2014 Japanese Grand Prix.

“I want dedicate this one to Jules (Bianchi),” added Ricciardo.

“I have been waiting for a victory to dedicate to him. My life changed since that incident and I’m grateful and appreciative of what I have got.”