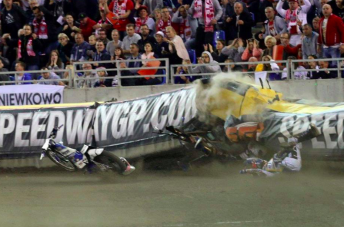 Australian Jason Doyle has lost the lead in the FIM World Speedway Championship after crashing out of the Grand Prix of Poland.

The Newcastle rider tangled with Brit Chris Harris in heat three at Torun which fired both riders into the barriers at speed.

Doyle was forced to withdraw from the event with shoulder, elbow and lung injuries, sacrificing his championship lead to American Greg Hancock, who finished second behind event winner Niels-Kristian Iversen.

Hancock has opened up an 11 point lead over Doyle heading into the final round at Melbourne’s Etihad Stadium on October 22.

The three-time world champion admitted it was difficult to take the championship lead after witnessing his rival crash.

“It’s bad luck. I can feel for Jason because I have been there,” said Hancock.

“He’s a tough guy and I hope his injuries are not so serious that he can’t come back in Melbourne.

“He deserves a fair shot. Seeing his accident hit me inside. I know he didn’t go in there very well.”