Lowndes embraces Bev Brock at Bathurst in 2006. pic via adelaidenow

All 11 previous winners of the Peter Brock Trophy will steer a selection of the legend’s cars during a tribute at the Supercheap Auto Bathurst 1000 on Sunday, October 9.

The parade will mark the focal point of festivities commemorating 10 years since the icon’s death on the Targa West tarmac rally in September, 2006. 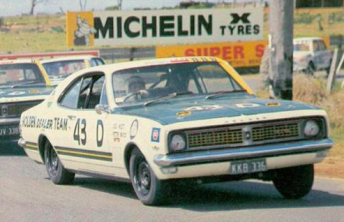 An eclectic mix of cars has been pulled together for the tribute lap, representing a diverse cross-section from Brock’s extensive career.

Craig Lowndes will reunite with Brock’s 1972 Bathurst winning Holden Torana XU-1 to lead the line-up of modern stars in the proceedings.

A teary-eyed Lowndes famously drove the Torana at Bathurst in 2006 before going on to claim his second of six Bathurst wins later that day. 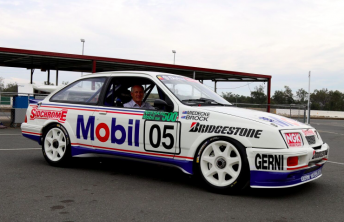 The two retired winners of the Peter Brock Trophy, Paul Morris and Mark Skaife, are slated to drive a Mobil BMW M3 and a tribute to Brock’s 1975 Bathurst winning Gown-Hindhaugh Torana respectively.

Mostert has been assigned the Austin A30 replica built by James Brock, while Winterbottom will strap into the Mobil Sierra recently restored by Andrew Miedecke.

“It is going to be really cool as it is one of my favourite cars and the reason why we are doing it is special,” Winterbottom told Speedcafe.com

“The Brock legacy is a massive thing and 90 percent of it is Holden dominated so it is cool to be part of that in a Ford which he drove.

“It is just going to be a special moment and I’m sure there will be plenty of emotions 10 years on from Brock, but also the closure of Ford production in Australia on the Friday at Bathurst. 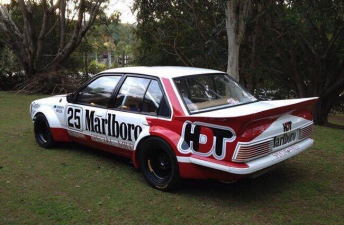 The ’83 tribute car to be driven by Phil Brock

“It is a pretty significant weekend and emotional for lots of reasons.”

Peter’s brother Phil Brock, who will present the trophy to the winners at the end of Sunday’s race, is also set to take part in the parade.

Brock will be behind the wheel of a car built in tribute to the #25 HDT Commodore that won Bathurst in 1983.

Phil Brock had originally been scheduled to share the car in the ’83 race with John Harvey, but did not get to drive after Peter Brock and Larry Perkins took over when their own #05 entry suffered an early retirement.

The decision not to let Phil into the car controversially denied ‘Split Pin’ the chance to join his brother on the honour roll of Bathurst winners.