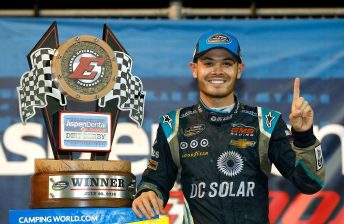 NASCAR Sprint Cup racer Kyle Larson will head to Australia at the end of the year to race sprintcars at Valvoline Raceway.

Larson has enjoyed a breakthrough season in NASCAR’s Sprint Cup this year highlighted by a maiden victory at the Pure Michigan 400 in August.

Larson will begin his Australian schedule with an appearance in the Australian Sprintcar Grand Prix on Boxing Day December 26 followed by a run in the Peter Murphy Appreciation Night meeting on December 28.

“I’m really excited about coming Down Under to Valvoline Raceway,” said Larson.

“I often check out the coverage of the racing down there and watch my friends Brad Sweet and Kasey Kahne race. I feel like I know a bit about the place before I’ll even get there.”

“We’ve been working on this for some time now and I’m delighted to say that Kyle has agreed to come and race with us.

“Right now those dates are what he has time for, certainly if he’s available for any other opportunities at our MadeTooGo circuits we’d love to accommodate him.

“To be honest we’re just so grateful for those four nights, but if he has the time and the inclination to extend his stay I’m sure we can find room for him.”