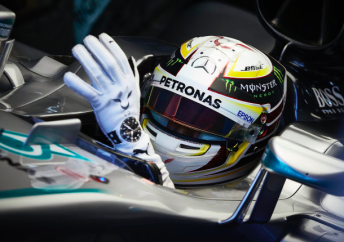 The reigning world champion was the only driver to dip into the 1:34s bracket as he headed the times by 0.2s from title rival Rosberg.

Hamilton’s personal best arrived on soft compound rubber with just under an hour of the second 90 minute session remaining.

Rosberg backed up Hamilton’s pace in the sister Mercedes to end Friday practice in second spot having topped the morning outing.

The Maranello squad were well shy of the Silver Arrows’ pace with Vettel 0.6s slower than Hamilton’s benchmark.

It proved to be a difficult day for Red Bull with the Milton Keynes squad more than a second adrift of Mercedes.

Alonso debuted an upgraded Honda power unit in Practice 2 with the Spaniard set to revert to an older specification engine for tomorrow.

The double world champion, who damaged the floor of his car during the session, will incur a 30-place grid penalty and start from the rear of the field.

Renault’s Kevin Magnussen joined the session late after his car underwent a sizeable repair following a fire in opening practice.

The Dane was 19th fastest and well adrift his team-mate Jolyon Palmer in 12th position.