Simona de Silvestro speaks with Speedcafe.com’s Stefan Bartholomaeus as the 28-year-old Swiss prepares for her return to Bathurst and a full-time Supercars drive from 2017.

SPEEDCAFE: Simona, welcome back. You’ve had two days in the Nissan at Winton this week. How did you go reacclimatising to a Supercar after 12 months away?

SIMONA DE SILVESTRO: It was quite good. The first day was really about adapting and the second day was a lot more comfortable.

It’s always hard when you haven’t driven a car for so long and changing to a closed car is a little bit difficult, but I enjoyed working with the team.

The boys at Nissan have done a really good job preparing the car and I feel good going into Bathurst. De Silvestro aboard the Nissan at Winton

SPEEDCAFE: A Supercar couldn’t be any more different to the Formula E car that you’ve been driving. What are the biggest things to adjust to when you make the transition?

DE SILVESTRO: The Formula E car is so different to drive because you have regen (recharging the batteries under braking) and stuff like that.

Here you don’t have any of that and just being a closed car, the view, you don’t see as much as an open-wheel car.

When you’re not used to driving these cars that’s quite hard in the beginning, just to find your way around that.

The weight of the car when you get to the braking zones, in your head you think you can brake at 50 metres, but it doesn’t work.

It’s about slowing down everything in your head and trying to understand really how the car has to be driven.

There’s a lot of work going into that from my side.

SPEEDCAFE: Was it a shock this year jumping into the Nissan, because the seating position is a bit further back than in the Ford you drove last year?

DE SILVESTRO: Yeah, it was. The first two laps I was really like “I can’t remember not being able to see anything out of these cars!”.

You get used to it, but at first I was like “oh wow, this is a bit different”.

SPEEDCAFE: Will the fact that you’ve changed teams make Bathurst any more difficult for you, or are those differences minor in the scheme of the overall challenge?

DE SILVESTRO: It’s not that I was used to the Ford or anything like that because I’d only driven it for two days (at Winton) and a couple of sessions (at Bathurst) before the race.

I don’t think it’s really the car that was making a difference, it’s just about me understanding how to drive the car and get close to the limit.

The last bit is always the hardest to find. We need to get close to that last bit before we start working on the car.

The biggest gains that I’m making are in me adapting to how I have to drive. The Supergirls had two days of testing at Winton

SPEEDCAFE: What are your targets going to Bathurst this year? Last year when you did the 2:08 in Practice 6 you were only a couple of tenths off the back of the regular field…

DE SILVESTRO: For me the biggest goal is that I want to be in the mix, you know?

In that Practice 6 we were close and hopefully this time we can be that close a little bit earlier in the weekend and then start creeping up on that.

We want to be in there where we should be and not super far off.

That’s the biggest goal, to get as close as we can lap time wise to our team-mates and the other guys in the field.

SPEEDCAFE: You’ve committed to Supercars for the next three years after only one race in the category. Was it a hard call to make, giving up on open-wheelers to come and do this?

DE SILVESTRO: It was certainly a hard decision. Australia is not just around the corner, so there was a lot of thinking.

After Bathurst last year, I really enjoyed driving the cars, which are a lot of fun to drive, and how the racing is in the series.

Coming out of that event I thought it was something to consider because I had fun.

I wouldn’t have thought it would come so quickly, but for sure the last few months have been a lot of stress on everybody around me making the decision.

Moving away for three years, it’s not a quick flight back home, so it is a big commitment.

But I’m going to get a really good chance and it’s important for me to get a competitive chance so I can start showing what I can do.

SPEEDCAFE: A big part of that equation is going to be which team you end up with. How close are you on a decision there?

DE SILVESTRO: We’re still working on it, no decision has been made right now. 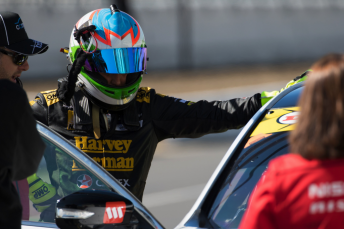 SPEEDCAFE: Would it be an ideal scenario to continue with Nissan, given the time that you’re going to spend with them at Bathurst?

DE SILVESTRO: Yeah, for sure.

It’s the fifth car right now and I know some of the guys aren’t full-time, so it’s always hard.

But I’m pretty comfortable here. The team is good and I really get along with everybody.

Nothing is set yet or anything, but it is a team that I’ve enjoyed working with the last few days.

SPEEDCAFE: Is it one of your options for next year, Nissan?

SPEEDCAFE: Your entry into Supercars has come under the Supergirls banner and is the result of a push from the category to have a female driver.

Do you feel that it’s part of your role to blaze the trail for females in this category? Or do you just see yourself as another driver?

DE SILVESTRO: I always just see myself as another driver. For me it’s important to be competitive and to get the job done.

But for sure I think what Supercars has done, making it possible for a female to get a chance in a big category, that’s not happened in my career.

Racing is so difficult because it’s always dependent on sponsorship, so I am going to get into that role a little bit (promoting females in the sport).

But I don’t think it’s all about Supercar, it’s about any job.

If a girl wants to be an electrician or anywhere there’s not traditionally a lot of females involved… if you want to do that, why not do it?

I think that’s what’s great about motorsport. I’ve had this dream of becoming a race car driver and it’s a sport where anything is possible.

If you work hard enough, you can achieve. 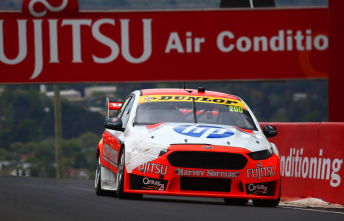 An early mishap for Gracie delayed the Supergirls in 2015

SPEEDCAFE: The biggest hurdle for you obviously is that you’ve not grown up with these cars and circuits. Did you look at the struggles that the likes of Alex Premat and Maro Engel faced down here? Was that a concern for you at all?

DE SILVESTRO: No, it didn’t put me off at all. You have to be realistic. I’m not going to come in next year and win races.

You know it will take time, but that’s the same with anything. When I did Formula BMW I was pretty competitive and then I went into Formula Atlantic and it was a much bigger car with a lot more downforce, which took me a year to get used to.

It’s going to take time and I’ll have to be patient with myself as much as anything. But hopefully I’m a pretty quick learner and we can progress smoothly.

SPEEDCAFE: Is there any chance you’ll do any racing outside of Supercars next year?

DE SILVESTRO: As a driver you want to sit in a car every weekend, but I think especially in the first year I’ll need to focus quite a lot on this.

Everything is so new, I really feel like a rookie. Everything I’ve learnt in the past I have to put on the side and relearn.

The focus next year is definitely going to be in Supercars, but you never know.

If there’s a one-off and it doesn’t disturb what I’m doing here, why not?

SPEEDCAFE: Is it fair to say that the clash between Winton and the Indy 500 qualifying weekend rules you out of a return to the Brickyard?

DE SILVESTRO: Yes, I think so. It’s a bit difficult to do it without being there for all the practice and qualifying.

It looks like it’s ruled it out for next year, but who knows in the future?