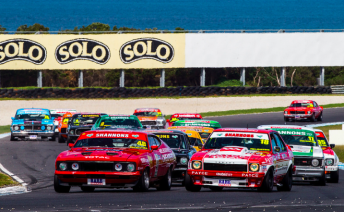 The Touring Car Masters series will host its final round at Supercars’ Sydney 500 after abandoning its slot at the Muscle Car Masters next month.

The category had planned to host its season finale at Sydney Motorsport Park’s Muscle Car Masters from October 28-30 as part of an eight-round schedule announced last year.

However, organisers have elected to withdraw from the event amid concerns surrounding the quality of the grid it could provide given the proximity to its showpiece round at the Bathurst 1000 October 6-9.

Muscle Car Masters moved its event from its traditional September Father’s Day weekend slot to the last weekend of October for this year’s edition, separating it from August’s SMP Supercars round.

The TCM has been a mainstay on the Muscle Car Masters schedule with the exception of the 2014 meeting.

Following an approach from Supercars, the series will now join the support bill at the Sydney Olympic Park curtain closer from December 2-4.

“There were several factors in the decision but the main reason is we were never going to be sure that we could put on a good field after Bathurst,” Touring Car Masters category manager Tony Hunter told Speedcafe.com.

“The other part of the decision is we were encouraged by Supercars to join their product (at Sydney).”

TCM is also expected to skip the Muscle Car Masters next season, instead electing to run its entire schedule with the Supercars Championship.

This year it featured on the Supercars bill in six of eight meetings having joined the Shannons Nationals for rounds at Sandown and Phillip Island.

While without the TCM, the 2016 Muscle Car Masters will feature the Trans-Am Series, which also caters for American muscle cars from the 1960s and ’70s.