Two of Peter Brock’s Bathurst 1000 cars making their first public appearances since significant restorations will form part of a display honouring the ‘King of the Mountain’ at next month’s Supercheap Auto Bathurst 1000.

The Mobil Holden Dealer Team Commodore VK driven by Brock and long-time rival Allan Moffat in 1986 is in the final stages of restoration and will make its first public appearance as part of the 10-year commemoration of Brock’s passing and the creation of the Peter Brock Trophy.

Also present will be the restored Mobil Ford Sierra RS500 Cosworth that Brock took pole position with in 1989 and drove to fourth-place in the 1990 race with Brit Andy Rouse as co-driver.

The two cars are part of a group of approximately 15 machines that have been sourced from all over the country as part of a special celebration by Supercars of the life and cars of the nine-time Bathurst winner.

Among the list are a range of familiar Commodores and Toranas with special and interesting cars from Brock’s long career also expected to be part of the display.

The turbocharged Ford Sierra that will be at Bathurst was purchased by Brock’s former Mobil teammate Andrew Miedecke last year and has just had an impressive restoration completed.

The car has been returned to how it last raced at the finish of 1990 when Brock and Miedecke drove together and won the Nissan-Mobil 500 Series across Wellington and Pukekohe in New Zealand.

The VK Commodore that will be at Bathurst is the car raced by icons Brock and Allan Moffat in 1986 that the latter famously crashed during Friday practice at McPhillamy Park.

Repaired by the Holden Dealer Team it was able to allow the ‘dream team’ to compete and finish fifth in the race.

The same car also won the 1987 Wellington 500 in the hands of Brock and Moffat, the last victory by the HDT with the backing of Holden prior to the now-infamous divorce between the car giant and its favourite racing son.

Later updated to VL specification it was Neil Crompton’s first touring car when he debuted with the Mobil HDT outfit in mid-1987 and finished fourth in that year’s Castrol 500 at Sandown with Crompton and Jon Crooke driving.

After spending nearly a decade in Perth it was purchased last year by collector Terry Smart and entrusted to former HRT new car build chief – and premium racecar restorer Rick Wyatt – to return to 1986 Bathurst VK specification and livery.

October is set to be a big month of Brock celebrations, with Sydney Motorsport Park’s Muscle Car Masters also planning to pay tribute to the legend.

Brock’s 1993 Mobil 1 Racing Commodore VP Bathurst will be in attendance at the October 29-30 event, while a selection of HDT road cars will take part in displays and parades. 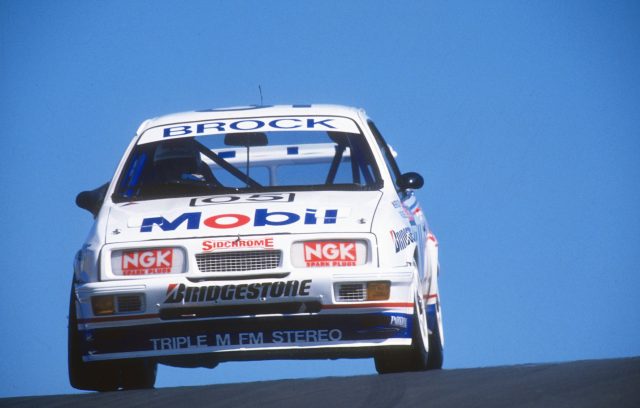 A new Collector’s Edition magbook covering the histories of all of Peter Brock’s Bathurst race cars will be released during race week at Mount Panorama.

Edited by Aaron Noonan, the 144-page soft cover release is $20 and can be pre-ordered online.