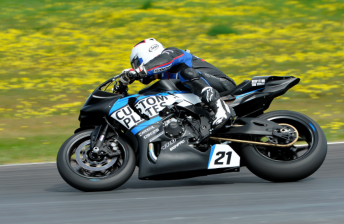 Two-time champion Josh Waters will rejoin the Australian Superbike Championship for this weekend’s final round at Winton.

The 29-year-old will ride a Yamaha R1 after securing a deal to join new privateer outfit Apex Motorsport, which includes an outing in the Superbike support race at the Australian Motorcycle Grand Prix at Phillip Island next month.

Waters’ time in England provided mixed results with his highlight being a victory for Tyco Suzuki at the Brands Hatch Grand Prix circuit in 2014.

The 2009 and 2012 Australian Superbike champion has spent the majority of 2016 away from racing, although the Victorian enjoyed a strong run to fifth at the prestigious Suzuka 8 Hours for Moto Map Suzuki.

Mildura-born Waters admits his return to the Australian Superbike Championship is tinged with nerves given his previous success in the category.

“I’m really excited to be back out there this weekend. Of course I’m a little bit nervous, as my last year here (in 2012) was a successful year,” said Waters.

“Obviously it’s going to be hard, because all these guys that I’m racing against are Australia’s best riders and they’ve been racing these bikes all year.

“It’s not going to be easy, but being a racer I want to try my hardest and hopefully be towards the front end.

“Phillip Island is a great event and to be racing in front of such a big crowd is always good.”

Waters will jump aboard the Apex Motorsport Yamaha for three practice sessions on Friday ahead of Saturday’s qualifying and two 17 lap races on Sunday.