BMW will return to Le Mans for the first time since 2011 pic: BMW Motorsport

BMW has announced plans to return to the Le Mans 24 Hours as part of an assault on the 2018 FIA World Endurance Championship.

The German manufacturer will develop an all-new race car to contest the GTE class in the global endurance racing series, which includes the prestigious Le Mans 24 Hours French classic.

It’s only outright victory as a constructor at the race arrived in 1999 with the BMW V12 LMR.

Details of the manufacturer’s new GTE challenger are yet-to-be-announced, although it is believed the car could be based around its M5 or M6 models.

“Starting with the 2018 season, we want to further expand our activities in GT racing and compete in the FIA World Endurance Championship, as well as the IMSA WeatherTech SportsCar Championship,” said BMW Motorsport Director Jens Marquardt.

“This obviously also includes our return to Le Mans, which we are particularly looking forward to.

“The way the WEC has developed so well makes us confident that there is a big future for GT racing.

“This is also the motivation behind our further expansion in the customer racing sector. Our range is already spearheaded by a successful representative, in the form of the BMW M6 GT3.” 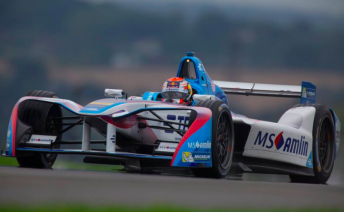 Alongside its renewed commitment to GT racing, the firm has revealed a partnership with the Andretti Formula E squad.

BMW has been heavily linked with the all-electric single seater championship and has now confirmed it is evaluating a future factory effort.

The Bavarian maker will work closely with the American operation, which features works driver Antonio Felix da Costa, from the 2016/2017 season onwards.

Marquardt says a full factory effort will be considered for the 2018/2019 campaign, which will see the championship abandon its mandatory car changes during races.

“Over the coming years, the co-operation with Andretti Formula E will primarily focus on familiarising ourselves with the procedures and processes, and on intensifying our knowledge,” said Marquardt.

“Our works driver Antonio Felix da Costa will be in action behind the wheel. A works involvement is then conceivable as of the series’ fifth season.

“The premise for all these steps is the further positive development of the series, which includes increasing the capacity of the batteries, for example.”

BMW is the latest manufacturer to join the series following in the footsteps of Jaguar and Audi.

The new Formula E season will begin on the streets of Hong Kong from October 9.