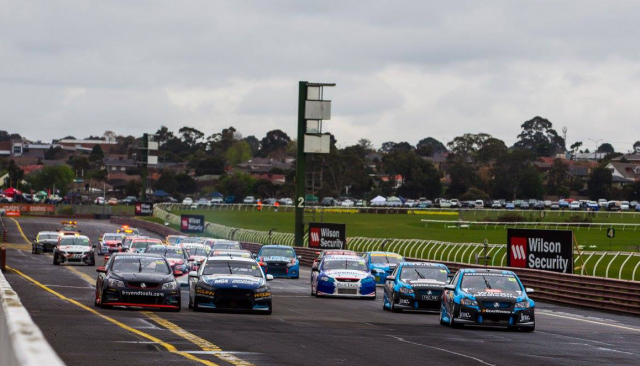 The Dunlop Series field at Sandown

Leading team owners have called for a crackdown on driving standards in the Dunlop Series following a crash-fest during the most recent round at Sandown.

The three Sandown races were littered with incidents, including a five-car collision triggered by Matt Chahda at the start of the second heat.

While Chahda was excluded from the meeting for reckless driving, a smattering of other collisions went unpunished.

Title contender Jack Le Brocq was among those in the thick of the action, barging Todd Hazelwood from the lead on the final lap of Race 1 in a move that denied the South Aussie a maiden win.

The Prodrive star’s weekend also included a tangle with Taz Douglas midway through Race 3 that tipped the Eggleston Holden off the circuit and into the barriers at the end of the back straight.

Frustrated by a lack of action over the incident, team manager Rachael Eggleston says that the cost of repairing damage to the #54 Holden could prove the end of Douglas’ season.

“It was an avoidable incident that has caused a lot of damage, cost a lot of money and has most likely ended Taz’s year,” Eggleston told Speedcafe.com.

“PD (Paul Dumbrell)’s car also got a big hit in the rear in the same race causing considerable damage.

“Nobody in the Dunlop Series has a budget that can withstand the sort of damage that we saw at Sandown.

“It seemed very clear at the drivers’ briefing what was acceptable and what was not. We went away from that thinking we understood.

“But then there were a number of incidents that were deemed no breach of rules despite people’s races and entire championships being ruined.

“There was a lot of upset people in the paddock and the industry after both races that cannot understand why no penalties were handed out.”

Chassis specialists Pace Innovations are currently helping repair the car for the teenager to continue in the series at Bathurst.

Team owner Matthew White believes that even Chahda’s penalty did not send a strong enough message that reckless driving will not be tolerated.

“We’ve got to draw a line in the sand and say ‘this is not acceptable’,” White told Speedcafe.com.

“The rule book says that prior incidents aren’t taken into account, but if the same bloke keeps doing something then that needs to be looked at.

“It comes back to drivers using their heads a bit more as well.

“When cars are getting fired into the walls, that’s not what we’re there for.”

Both White and Eggleston fear that drivers will be put off competing in the series if standards are not improved.

“I feel that some of the driving we saw at Sandown wouldn’t be accepted in the main series,” continued Eggleston.

“How much experience a driver had is irrelevant. It’s the same set of rules (across the two series) and it should be no different.

“People may look at this series, see how much damage is being done and think that they can’t afford to race.

“That’s not what anyone wants. We need to stamp it out now and show exactly why the Dunlop Series is the premier support category in Australia.”

The Dunlop Series continues with its annual 250km mini-endurance race at the Supercheap Auto Bathurst 1000.