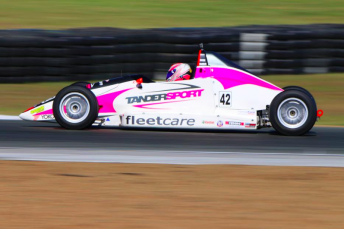 Leanne Tander remains in the box seat to claim the Australian Formula Ford Series title after scoring victory in the final race of the penultimate round at Winton.

The 36-year-old mother of two maintained her 32 point lead in the standings despite a weekend of mixed results at the rural Victorian circuit.

Tander’s title hopes were dented in the opening heat after a first lap clash with pole-sitter Jayden Ojeda.

The collision at Turn 3, which also involved rookie Cooper Murray, allowed Jordan Boys, who started from fourth, through to the lead where he stayed until the chequered flag.

Tander managed to salvage five points in 11th place after her Sonic Motor Racing Services team managed to fix a damaged radiator caused by the incident with Ojeda, who retired from the race. Jordan Boys took out the round at Winton pic: Judi McDonald

Boys recorded his second victory of the weekend in Race 2 as he led home a charging Tander, who surged to second having started from 11th on the grid.

Brown, who found himself in the lead on the first lap, came through to claim the final spot on the podium.

Andrew Kahl had led the majority of the race before a gearbox issue struck causing the Spectrum racer to retire after 10 of the 12 laps.

Tander proved unstoppable in the final race as she scored her fifth victory of the season in a Safety Car interrupted encounter.

A spin from Benjamin Reichstein neutralised the race just short of the halfway mark.

The Sonic Motor Racing Services driver took the win by 0.3s from Boys, who claimed his maiden round victory, and Ojeda, while title rival Brown was down in fifth.

“After a less than ideal first race yesterday, I was pretty determined to make amends today. And I did,” wrote Tander via her Facebook page.

“I moved from 11th to second in Race 2 this morning and took the win in Race 3.

“Overall, I still managed to take second for the round and maintain my lead in the championship.

“The final round is in two months at my favourite track, Phillip Island. Bring it on.”

Meanwhile, team-mate 15-year-old Courtney Prince, who become the youngest female racer to compete in the national series, finished 10th, 15th and 10th in the three races.

Tander is on course to become the first female to win a national circuit racing series at the Phillip Island finale from November 25-27.