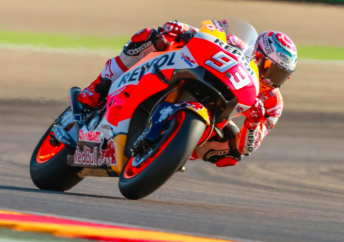 Marc Marquez will start the Aragon Grand Prix from pole position after a dominant display in qualifying.

The championship leader finished 0.63s ahead of Maverick Viñales, while Jorge Lorenzo made the front row in the dying moments of the session.

Marquez posted the fastest lap of the weekend on his first flyer.

The Spaniard’s 1:47.117s effort was some 0.7s faster than his previous best set during Practice 3.

While the Honda rider was unable to improve, his second and third-best laps were still significantly faster than what Viñales (Suzuki) achieved late in the 15 minute session.

“At this circuit normally my speed is really good, I always feel good,” said Marquez.

“Yesterday we struggled a lot with the setup but today we found a good setup and I improved a lot.”

Cal Crutchlow ran as high as second during the second run, but the LCR Honda rider was ultimately demoted to fifth after a Turn 1 crash.

Dani Pedrosa (Honda) was similarly edged off the second row by Valentino Rossi (Yamaha) after going down in the final minute of the session.

Hayden, standing in for the injured Jack Miller at Marc VDS Honda, went down on his own at Turn 14, before a separate incident in which Marquez fell and took Pol Espargaro with him.

Hayden and marshals attending to his bike had to scurry to avoid being struck by the out-of-control Honda and Tech3 Yamaha, the latter striking the American’s own machine.

Pol Espargaro had been involved in another incident just minutes earlier when he went down at Turn 2 and his bike slid into the path of Petrucci, who was exiting pit lane.

Alex Lowes, on the other Tech3 entry, sat out qualifying after incurring an injury following a crash of his own.

The Tech3 squad has confirmed the Brit has been diagnosed with a hematoma and significant swelling in his left foot.

Lowes will undergo further tests tomorrow morning, ahead of the 23-lap race at 2200 AEST.