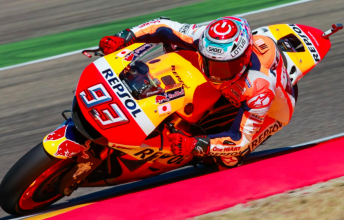 The factory Honda rider, who dominated qualifying, gave his rivals a glimmer of hope with an early error, but fought back to dominate the 23-lap race.

Yamaha’s Jorge Lorenzo made a strong start from the outside of the front row before Maverick Viñales (Suzuki) surprised he and Marquez with an audacious move for the lead.

Marquez passed Lorenzo and Viñales on consecutive laps to lead after Lap 2.

However, he dropped to fifth next time around after nearly losing the front of the bike at Turn 7, handing control of the race back to Viñales.

Rossi took the lead on Lap 8 before an error from Viñales gifted second place back to the recovering Marquez on Lap 10.

The Spaniard wasted no time in running down Rossi (Yamaha) on Lap 12, making the move at Turn 15, just as he had done for all the others.

Lorenzo, who had by now passed and shaken off Viñales, took second position off his team-mate Rossi on Lap 19.

The Italian made a desperate lunge at Lorenzo at Turn 12 on the penultimate lap, but was far too deep and that moment settled the dice.

Marquez, meanwhile, had cleared out to a 2.7s victory, his first on Spanish soil since the 2014 finale in Valencia.

“I did a mistake when I was leading,” admitted the 23-year-old.

“I nearly lost the front and then I said, ‘Okay, stay calm, warm up the front tyre,’ because I was on the hard one.

“I’m really happy because in the last few races Rossi was gaining points but now we’ve stopped this and this is good.”

The 2013 and 2014 world champion now leads the standings by 52 points with 100 on offer across the final four races of the season.

The two Gresini Aprilias of Alvaro Bautista and Stefan Bradl rounded out the top 10.

In Moto2, Sam Lowes led for all but the opening half a lap, while Australian Remy Gardner finished 19th from 25th on the grid.

The South African made a decisive final-lap move from fourth to second after a long-time battle with Jorge Navarro, Enea Bastianini, and Fabio Di Giannantonio.

Navarro hung on to deny Binder a sixth win of the season by just 0.030s.

MotoGP takes two weekends off before the final flyaway races of the season, starting in Japan from October 14-16.