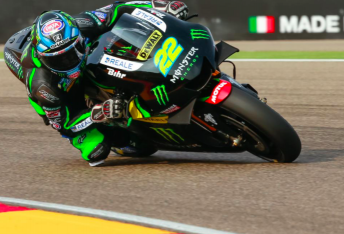 Alex Lowes has been ruled out of the Aragon Grand Prix due to a left foot injury sustained in a practice crash.

Lowes, who had been standing in for injured compatriot Bradley Smith at the Tech3 Yamaha team, was one of several to crash during a dramatic third practice.

The Briton did not take part in qualifying with further tests taking place this morning.

Those tests cleared the full-time Yamaha World Superbike rider of broken bones, but a hematoma and swelling to his foot has ruled Lowes out of tonight’s race.

“An X-ray was undertaken that revealed that no bones were broken, yet swelling and contusion to his foot meant that he was forced to sit out yesterday afternoon’s action (qualifying),” read a statement on the team’s Facebook page.

“His injury did not improve overnight and after being re-examined by the medical staff this morning, he has subsequently been declared unfit.”

Smith had incurred ligament damage to his right knee in a practice crash at the Oschersleben 8 Hours.

Marc Marquez holds pole position for Round 14, which starts at 2200 AEST.