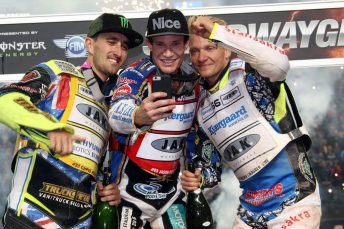 Jason Doyle has led an Australian one-two in Stockholm to shoot to the top of the FIM World Speedway Championship.

In claiming his third consecutive win, Doyle now clutches a five-point lead in the standings after beating compatriot Chris Holder.

Greg Hancock, who was holding the lead in overall point score from Doyle going into the Swedish round could only manage nine points, has now slipped to second with two rounds remaining.

“I can’t really comprehend what I have achieved at the moment,” Doyle said.

Doyle has become the first rider to win three on the bounce since Australian legend Jason Crump in 2006 when he claimed the world title.

“I still have a long way to go, but to win three GPs in a row is unbelievable,” Doyle said.

“When I had gate one in the final, I knew I had to stick to the inside.

“I knew they were going to try and go around me and it would be a pretty desperate first corner. I stuck to my own plan and it worked again.”

The final two rounds are scheduled for Torun, Poland, next weekend with the final at Melbourne’s Etihad Stadium on October 22.