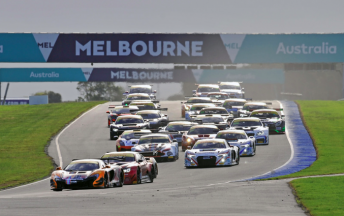 Australian GT is keen to evolve its endurance championship to feature a 1001km race at Hampton Downs next year.

The Tony Quinn run category launched its Australian Endurance Championship this year with a series of four 101 lap races, building on the success of the format used at Highlands Park and Phillip Island in recent seasons.

Already preparing for next year, the Scottish-born businessmen is setting his sights on expanding the format into a 1001km 262-lap showpiece race.

The proposal arrives alongside plans for the Endurance Series to feature up to five rounds next season.

The championship will also run to a new driver grading system and mandatory pitstop procedure.

Quinn’s latest acquisition Hampton Downs, near Auckland, has been tipped as a possible venue for his latest concept.

The circuit has undergone a major $23.5 million upgrade featuring a newly constructed 1km track extension, which will be officially opened when it hosts the penultimate round of the Australian Endurance Championship from October 28-30.

“We have built up the 101 brand with our endurance races but next year I’m pretty determined to do a 1001km race,” Quinn told Speedcafe.com.

“I think depending on how Hampton Downs goes this year, I would think it would a be a great venue for that.

“We are definitely looking into it.”

Hampton Downs could become a focal point for GT racing in the Australia and New Zealand region with plans also underway for the venue to host a bespoke Australasian GT3 race.

Discussions between Quinn and GT Asia bosses are underway with the two parties currently working towards finalising a date in 2018.