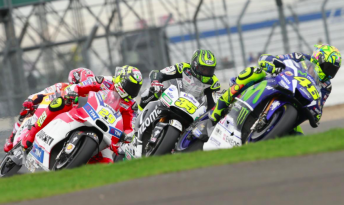 The move arrives following a spat between Valentino Rossi and Aleix Espargaro during practice at the San Marino Grand Prix.

Nine-time world champion, Rossi, raised his middle finger in response to Espargaro, who impeded the Italian.

Prior to this weekend’s Aragon Grand Prix, riders were sent an email from officials warning that such behaviour is no longer prohibited and will be punished by fines.

Rossi understands the sport’s move to introduce the ruling, but believes riding standards should be more closely policed.

“My mistake is that I do like this (raises middle finger), but apart from that I was right 100 percent,” said Rossi.

“When I do this (repeats gesture) maybe I exaggerate a little bit, so it’s right you can’t do like this.

“But from the other side, when one rider is on the track he has to keep attention to the other one; if not, it’s not fair, and it’s a lot worse (than hand gestures).”

Meanwhile, LCR Honda’s Cal Crutchlow feels the rule will take away some of the passion from on-track battles.

“We got an email last week and I’m disappointed with that rule change,” said Crutchlow.

”It adds a little bit of spice. I liked what Rossi did at Misano, why not?

Qualifying for the Aragon Grand Prix is scheduled to begin at 2210 AEST.