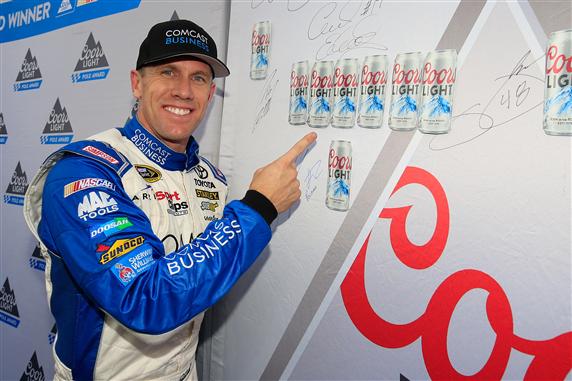 Carl Edwards will start from pole in the second race of NASCAR’s Chase for the Sprint Cup at New Hampshire Motor Speedway.

This is Edwards’ third pole in the last four races at New Hampshire and his sixth of 2016.

Championship leader Martin Truex Jr. will share the front row in another Toyota.

“They just give me fast race cars,” said Edwards.

“We worked in qualifying trim most of our first practice this weekend and now we have to translate that speed to a good race set-up for Sunday. We’d like to come out of here with the trophy and make our way to the next round of the Chase.”

The main talking point was the inspection process by officials as qualifying was approaching with 10 cars not making it through inspection before qualifying began. Many failed the first pass through in what was described by NASCAR officials as “attempts to push the limits” of the rules. In the end all cars passed inspection and turned in qualifying laps.

Everything was able to get on the track before the first round ended, but Dillon and fellow Chase driver Chris Buescher (P28) did not advance past the first round.

The microscope has been placed on all aspects of the inspection process after last week both race winner Truex and Jimmie Johnson both had what NASCAR called minor failures following post-race inspection.