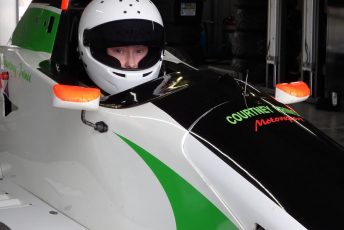 Courtney Prince is set to become the youngest female to contest a national round of the Australian Formula Ford Series at Winton this weekend.

The aspiring Melbourne racer will make her series debut at the rural Victorian circuit just days after her 15th birthday.

Prince has progressed to cars this season having raced karts since she was eight-years-old.

This year she has been competing in the Victorian Formula Ford Championship, but will step up to the national series for only her third outing in the discipline.

Prince will run with the renowned Sonic Motor Racing squad which will see the teenager line-up alongside series leader and role model Leanne Tander, who drives for the same operation.

This weekend’s round will act as a warm-up for a likely full season in the series next year.

“I’m feeling really excited but nervous at the same time as this is my first time at a national round,” Prince told Speedcafe.com.

“It is a big challenge moving into car racing managing gears and weight transfer, which makes it a lot harder to drive but I love it.

“I’m happy with the progress I have made but there is still a lot to learn.

“Leanne (Tander) drives for the same team as me and is really good to talk to as she has been a lot of places in motor racing and is a good inspiration.

“I would love a full-time drive in anything but my ultimate goal is F1 but I’m also keen on Supercars.”

Prince joins a 15-strong entry for the penultimate round of the Australian Formula Ford Series.