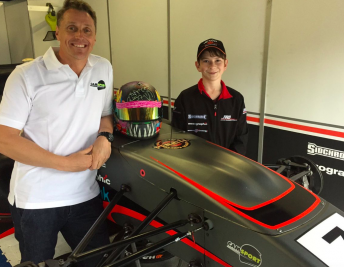 Known as Camsport, the initiative offers drivers guidance for all aspects of the sport, including coaching and mentoring on race weekends, media training and commercial assistance.

Australian Formula 4 competitor Tyler Everingham is the first driver to take up the program beginning at Sandown last weekend.

McConville says the concept has been three years in the making with his interest in helping young drivers sparked during his previous role at CAMS in charge of Formula 4.

Prior to overseeing the Australian Formula 4 Championship, he worked as a driver development manager in his first stint at CAMS.

“This has been something that I identified even before I started at CAMS as I thought there was a bit of a hole to help young drivers,” McConville told Speedcafe.com.

“While I was at CAMS I saw it first hand that a few drivers coming from karting to Formula 4 were not really sure how to go about it in a number ways like preparing themselves and finding teams to run them.

“My vision is more about developing the grassroots side as far as giving the drivers media training and advice on sponsorship proposals, but most importantly preparing them for the race weekend.”

McConville impressed on his return to Supercars after a four-year hiatus as he helped Nick Percat to ninth at the Wilson Security Sandown 500.

The experienced Victorian racer was forced to bear the brunt of difficult wet conditions which saw him circulate for large parts of the race on slick tyres.

The 42-year-old has credited his impressive performance to his relaxed approach to this year’s Pirtek Enduro Cup and is hopeful his form will continue at Bathurst next month.

“We were fighting between 10th and 15th all weekend and it will be nice to keep that rocking for Bathurst with the goal of another top 10,” he said.

“If we can stay out of trouble than I think it is achievable.

“I’m taking a very different approach. I think when I was full-time and a co-driver before I was thinking about it every minute of the day.

“I just want to enjoy it this time and I’m just loving being back and that showed in how I drove the car. I think a little less pressure has worked well for me.

“However, I’m not resting on my laurels as I’m sure Bathurst will be another 50 percent harder.”