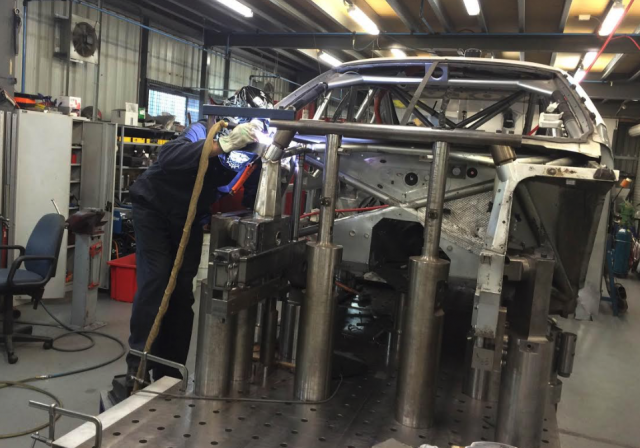 The Volvo crashed heavily by James Golding on the opening lap at Sandown is set to return to action at the Supercheap Auto Bathurst 1000.

Garry Rogers Motorsport has confirmed that repairs are well advanced on the #34 S60 and that the team will not have to resort to its spare chassis for the Great Race.

Golding’s Supercars Championship debut proved a baptism of fire when minor contact with Jack Perkins on the opening lap cut a right-front tyre, pitching the 20-year-old into the fence at the end of the back straight.

Barry Rogers told Speedcafe.com that the damage from the impact, which registered at 26G, was less than first thought. 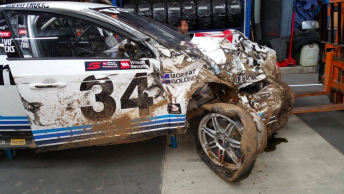 The #34 pictured on Sunday

Rogers is also confident that the accident won’t dent Golding’s confidence ahead of his maiden appearance in the Great Race.

“We could have prepared the spare car if we needed to, but there’s enough time to fix this one,” Rogers told Speedcafe.com, estimating the cost of the repair at around $70,000.

“The boys are having to do a bit of overtime, but it won’t delay anything in terms of getting the cars prepped or the truck packed and sent to Bathurst.

“It’s already out of the fab shop after getting its whole right-front corner rebuilt. It’s done the right-hand rail, shock tower, suspension points, swaybar mounts. Basically all the bar work forward of the a-pillar.

“But in the end the damage probably wasn’t as bad as we first thought. The tyres there absorbed quite a bit of the impact.”

Sore but uninjured, Golding returned to the wheel of his Dunlop Series Holden at Sandown on Monday, chalking up 70 laps during a ride day.

“It brings any driver back down to earth a little bit, but he’s young and enthusiastic so I don’t think it’ll bother him,” said Rogers.

“He has had a really good, solid year and we’ve been pretty firm in saying ‘don’t let that misadventure ruin your confidence’. 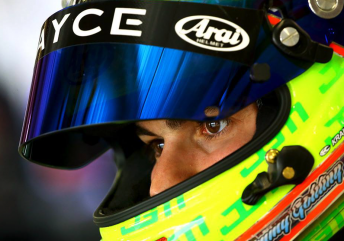 “If he’d made a mistake that caused it to happen it probably would affect him more, but it was a series of events that led up to it.

“When you look back at it, the real reason was that he didn’t get off the line well which put him back in the bunch, which resulted in the tyre getting caught.

“At Bathurst he probably won’t start the race anyway, so he will have a chance to get into the race and get into his rhythm.”

Rogers refused to blame Golding for not registering that the tyre was deflating before the point-of-no-return.

Monitoring the tyre pressure telemetry in the pit garage, engineer Jacob Rayner reported to Golding that “I think you might have a flat tyre Biebs, how does it feel?” as the driver entered the back straight.

Golding responded with a brief “feels fine” as he ran side-by-side with Perkins on the 270km/h approach to the left-hand corner.

“I don’t think we should blame James for misinterpreting the message because it wasn’t clear,” said Rogers of how the situation unfolded.

“And for the engineers, we’ve had some pretty poor readings from those tyre pressure monitors over the time so if you jumped at that all the time you’d be forever slowing down.

“It’s especially difficult on the opening lap when the tyre pressures are still coming up anyway. It’s just one of those things.”