Stunning Stanaway no surprise to Prodrive

Stunning Stanaway no surprise to Prodrive 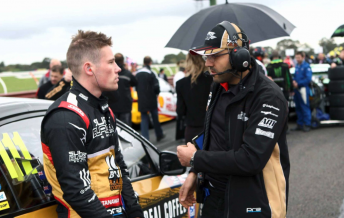 Richie Stanaway’s stunning performance on his Supercars debut at Sandown came as no surprise to the Prodrive team.

The 24-year-old Kiwi stole the show in the second stint of Sunday’s 500 as he drove the Super Black Ford through the field while on slicks in greasy conditions.

Stanaway had boldly elected against pitting for wets with the bulk of the field when heavy rain began to fall on lap 37, vaulting him into seventh.

Pressing on in the hope that the conditions would improve, Stanaway rose to third before a crash for Dean Canto – who was also on slicks – triggered a Safety Car period and a pitstop to install primary driver Chris Pither.

A former GP2 race winner and current factory Aston Martin driver in the World Endurance Championship, Stanaway’s debut had been highly anticipated by many.

Asked for his thoughts on Stanaway’s performance, Prodrive boss Tim Edwards said that the driver’s affinity for Supercars had been evident from his first run at Winton in May.

“I wasn’t surprised at all about how quick he was on Sunday because we saw it straight away,” Edwards told Speedcafe.com after Pither brought the car home in 17th.

“A lot of very experienced drivers from all over the world hop into these cars and they’re locking brakes and struggling to get their head around it.

“We expected to be educating him on that stuff at Winton, but after his first session we found it difficult to critique him. He did such a good job.

“He demonstrated what he can do to everyone on Sunday.” Stanaway affirmed that he’d been keen to stay out on the slick tyres to gain track position from his lowly starting spot, which came after a tyre pressure infringement saw the Super Black entry scrubbed from Saturday’s first qualifying race.

“The track was fairly intermediate so whether you’re on slicks or wets, pace wise it seemed similar so obviously starting at the back I wanted to roll the dice,” he said.

“There’s no point in just following everyone in to go for wets.

“It was much riskier because you can go from hero to zero pretty quickly in those conditions so I was just trying to survive.

“We went through phases where the slick tyre was better then the wet tyre was better and then I just tried to capitalise on the track when it started drying up a little bit.

“(I’m) pretty happy with my stint but obviously it’s a bit disappointing where we ended up overall.”

Stanaway raced at Sandown after being granted permission by Aston Martin to miss the weekend’s WEC event in Austin, Texas.

Having lived in Europe since 2010, Stanaway has made no secret of his desire to eventually return home and seek a full-time ride in Supercars.

Edwards expects that the driver, who has one year remaining on his Aston contract, will be getting plenty of phone calls from Supercars teams after Sandown.

“I think anybody with a seat available will be wanting to talk to him,” he said.

“Based on what we’ve seen so far I don’t think he’ll have an issue with that,” smiled Edwards of the challenge ahead.

CLICK HERE to vote for the driver that impressed you most during the Sandown 500 in this week’s Pirtek Poll.