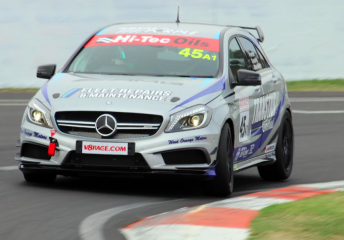 Garth Walden Racing has confirmed plans to field its Mercedes-Benz AMG A45 as part of a four-car entry in next year’s Bathurst 6 Hour.

The Sydney-based operation debuted the new car at this year’s Mount Panorama enduro with Garth Walden and Ben Porter behind the wheel.

The duo qualified second, posted the fastest lap and led the race before retiring after 48 laps due to an electronic problem.

Walden says his team has spent time developing the car since the race in preparation for a far stronger showing at the event held from April 14-17 next year.

“We are very keen to return and show what the car is capable of with a year’s worth of development and experience,” said Walden.

“The car went into the race this year with absolutely no testing and no development, so while it was disappointing to not finish thanks to the issues we had, it wasn’t a massive surprise.

“We were still able to show how fast the car was and that it will be a really good thing for the race.

“A lot of the durability issues with modern Production Cars are electronic and that’s what hurt us this year.

“We’ve been in touch with Mercedes-Benz in Germany and they are assisting in getting the problems sorted.

“There is a lot of potential to unlock in the car and we’re already so far ahead of where we were for the 2016 race.

“Having that preparation will be invaluable and it will be good to go into the race without having a car that was finished the week before.”

The team is yet to confirm the driver-line up for its Mercedes or the identity of its other three entries.

The Bathurst 6 Hour, which also doubles up as a round of the Australian Production Car Series, is on course to attract capacity grid.