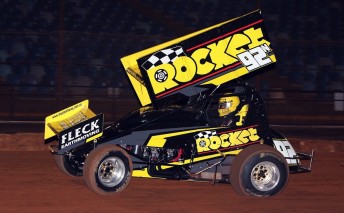 Cowin’s Eastern Creek based business has rapidly expanded into the speedway market over recent years and the Australian drag racing legend has extended his support to Valvoline Raceway as well as the two car team.

“It was great to see our company colours flying around the track (last season) so we’ve decided to continue our support for Sam and Ben heading into the 2017 season,” said Cowin – the first man to complete a Top Fuel pass in Australia under 5.0s.

“The boys will run a new GF1 chassis and a fresh paint scheme that will hopefully give them the edge.”

Walsh will run the Rocket colours, whilst Atkinson will line up with Aeroflow Performance on his main wing – another brand under the Rocket Industries umbrella.

The Ultimate Sprintcar Championship season in Sydney gets underway on October 1.