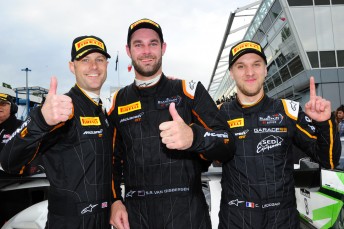 Shane van Gisbergen has expressed a desire to defend his Blancpain Endurance Series GT crown next year after scooping the title in unlikely circumstances last weekend.

The Kiwi landed his first major championship on Sunday despite being forced to miss the GT finale at the Nurburgring due to a clash with the Wilson Security Sandown 500.

The 27-year-old has complemented his Supercars campaign with a factory McLaren drive alongside Rob Bell and Come Ledogar in the series that saw the trio win two of the five rounds at Monza and Paul Ricard.

Van Gisbergen was forced to watch the race unfold via an internet livestream from his Melbourne hotel room just hours after taking the Supercars Championship lead at Sandown.

A horror run for the Garage 59 McLaren in Germany played directly to Van Gisbergen’s advantage as, with Bell and Ledogar failing to score any points, the Kiwi remained tied with the duo.

Now with the title on his resume his thoughts have turned to defending the championship next year for the British sportscar firm.

A deal to return with McLaren in 2017 has been broached but it will depend on the Triple Eight driver’s availability following the release of the 2017 Supercars calendar.

“I’m just waiting for the V8 calendar to come out and hopefully I will be able to go back and defend it next year,” van Gisbergen told Speedcafe.com.

“As long as it doesn’t take anything away from V8s I’d love to do it again, even if it is just selected races.

“We will see what I can schedule in when the V8 calendar comes out.

“It is pretty locked in (the deal with McLaren), I’m just waiting to see what they want to do.

“It is pretty awesome to do extra curricular activities if you want to call it that and to be a champion at it too.

“I’m not losing focus on V8s which is the ultimate goal but it is cool to race for the factory McLaren team and make it worthwhile by winning that championship.”

Van Gisbergen admitted it was a strange feeling being powerless while the championship battle played out on the other side of the world.

“It was weird sitting in the hotel room watching it through the middle of the night and being powerless,” he added.

“I had the timing going, the vision and all the radio chat. There was plenty going on so I was a full race fan trying to keep up with it.

“I felt like I was there and part of the team. I love to know what is going on but it was hard to watch not having influence in the championship we have been fighting for all year.”

Van Gisbergen could end the year with a second major championship with the Red Bull driver leading the standings after Sandown.

“It is good start to the Supercars season of endurance,” he said.

“(But) there is no point thinking about the championship until after the Gold Coast.

“We have had one good race and there are three more to go in this endurance section so we have got to keep our heads down and make no mistakes.”