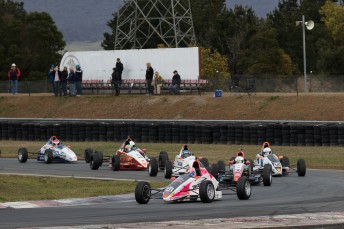 The Australian Auto Sport Alliance (AASA) will administer a round of an established national series for the first time this weekend when it hosts the Australian Formula Ford Series at Winton.

Round 5 of the Formula Ford series will run with the Victorian Motor Racing Championships, joining a host of state-level categories at the event.

It is the first time that the national Formula Ford category has competed without CAMS sanctioning since its inception in 1970.

Owned by the Benalla Auto Group that also controls Winton, the AASA has expressed its desire to sanction more national series in the future.

“Formula Ford is the proven breeding ground for young talent in Australia, especially those drivers with aspirations to forge a professional career in domestic racing categories such as Supercars,” said CEO Chris Lewis-Williams.

“For a long time, the AASA has had a reputation of sanctioning state and club-level motorsport and it is very encouraging to have the opportunity to sanction a national-level category, and especially one with such a robust reputation.

“This weekend, I am very confident the Formula Ford competitors will appreciate the level of service and scrutiny provided by the AASA, along with the excellent value for money offered by AASA-sanctioned race meetings.

“We will continue to work hard on our insurance products and look forward to sanctioning many more national circuit racing categories in the future.”

Leanne Tander holds a 32-point lead in the series over Formula 4 and Toyota 86 Racing Series leader Will Brown.

The Sonic Motor Racing driver could wrap up her first national series title this weekend if she leaves the weekend with a 62-point advantage.