Timely win as Walkinshaw plans ahead

Timely win as Walkinshaw plans ahead 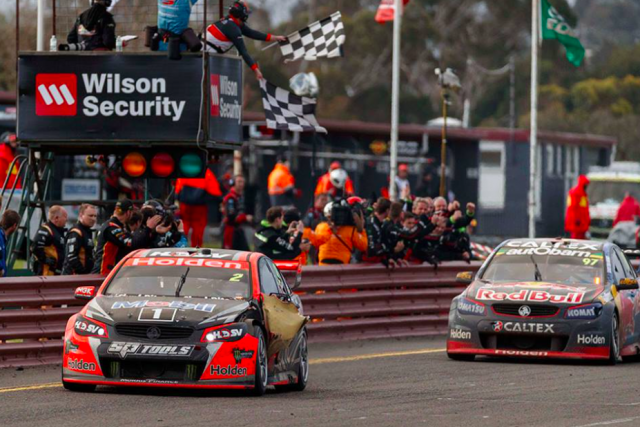 Adrian Burgess has labelled the Sandown 500 a ‘massively important win’ for the Holden Racing Team as the squad continues to work on its rebirth for 2017.

Sunday saw Garth Tander and Warren Luff combine to give the squad its first victory in 18 races in what has largely been a horror year for the Walkinshaw outfit.

Victory comes just a month after news that Holden will drop Walkinshaw next year, moving its factory funding and HRT name to arch rivals Triple Eight.

Burgess and new Walkinshaw commercial manager Troy Bundy are currently deep in negotiations to fill the $2 million funding hole left by the manufacturer.

“It’s a massively important win for us and our partners,” Burgess told Speedcafe.com.

“It’s come at a great time for all the staff to reassure them that there’s a bright future for the team post-HRT.

“It’s a good time for me and Troy when we’re out there talking to potential partners. It couldn’t come at a better time.

“We are going to carry on, we’re not just going to disappear and we’ve got a bloody good team here that’s achieved a hell of a lot over the years.

“I’m very proud of all the guys who kept their heads down, kept believing and kept working so hard.”

The desire to remain one of the category’s heavyweights has reportedly included re-signing star driver James Courtney.

Burgess, who declined to discuss Courtney’s contract or the status of its negotiations with Tander, says plans for rebranding the team are progressing.

“We’re not going to put a timeframe around it, but when it’s right we’ll announce what we’re doing,” he said.

“All of our current partners are saying good things and a couple of them have re-signed since the Holden announcement and I’ve even signed a new one since then.

“There’s a lot of discussions going on in the background, but at the moment we’re focussed on going racing.”

Although cautious about drawing conclusions after a single success, Burgess is eager to get to Bathurst and continue the team’s form.

Tander and Luff scored a podium at the Great Race last year, while Courtney returns to the event after missing 2015 with injury.

“Our car is definitely getting better and I think we’ve seen signs that we could deliver this over the last few events,” said Burgess of the Sandown form.

“We had a great test day and from the moment we rolled out here Garth and Luffy were in the top couple, so I don’t think we fluked it.

“The car is fundamentally different even compared to where we were halfway through this year.

“We changed our philosophy with the car four or five meetings ago and we have been re-learning some areas.

“It’s starting to bare fruit and we’re really excited to be going to Bathurst.”

Tander’s form has taken a dramatic upswing since debuting a new car in Sydney last month which replaced the chassis that was repaired following a heavy crash at Bathurst in 2014.

While Tander enthuses the new car “certainly responds to change more than the previous car”, Burgess says the team is yet to find fault with the discarded chassis.

“We’ve got that car on the jig and we’re measuring everything in very minute detail to understand if there was something wrong with it,” said Burgess.

“Hopefully we find something wrong with it, but at the moment all that matters is that the new car is working for him and that we’re moving forward.”