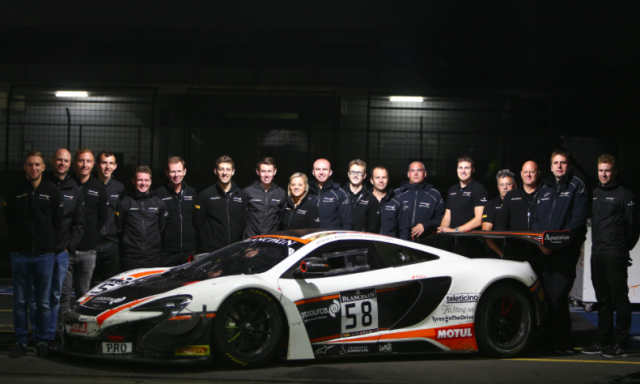 Missing the fifth and final round of the BES thanks to his commitments at Sandown, Van Gisbergen watched on via the internet as chaos unfolded at the Nurburgring.

Van Gisbergen’s regular co-drivers Rob Bell and Côme Ledogar were joined by stand-in Duncan Tappy for the final, but endured a horror run.

None of Garage59’s rivals proved able to capitalise, however, as they also struck varying degrees of trouble.

Spa 24 winners Alex Sims and Phillip Eng of Rowe Racing finished just 10th after struggling for speed with their BMW all weekend.

Garage59’s title had been set up by wins at Monza and Paul Ricard earlier in the five-race season.

“I still can’t believe that we are the champions, certainly not after the way things went today,” smiled Bell post-race.

“I made a small error, and I have to admit that at that point I thought it was all over.

“But somebody once said to me that sometimes you have to win ugly, and we won ugly today.”

Van Gisbergen expressed his delight at the result via social media.

“It was a weird feeling to be fighting for a championship watching a computer screen on the other side of the world, but so stoked to become Blancpain Endurance Series champion with Rob Bell, Côme Ledogar and Garage 59 McLaren GT,” he wrote.

“Congrats all wish I was there to celebrate with you.”

There was also success at the Nurburgring for Australian Liam Talbot, who claimed the Am Cup title along with co-drivers Marco Zanuttini and Vadim Gitlin.

The trio’s seventh place in the race was enough to secure the title, adding to the Kessel Ferrari’s success at the 24 Hours of Spa in July.

Yeaaaah!!!!!! Blancpain Endurance champions @garage59 !! So hard to watch and not be there!! 🏆🏆🏆#BlancpainGT