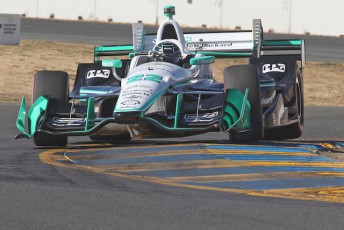 Pagenaud’s only threat to the crown, Will Power, was cursed with a clutch control unit issue, snuffing out his chances on lap 37 of 85.

The problem which prevented a gear being selected, extinguished Power’s hopes of victory and any chance he had of adding another crown to his 2014 series-winning effort.

“I think I will realise tomorrow (what he’s achieved). (there’s) So much emotion right now to be honest,” Pagenaud, who led 76 laps, said.

“My whole career has been about today and getting to this level. When you can perform at 100 percent under pressure like this, it is amazing.”

Power was eventually released back into the action after the crew fixed the electronic problem but he had lost eight laps in the process, eventually classified in 20th.

Pagenaud, who claimed his fifth win of the season and became the ninth IndyCar champion for Roger Penske in its 50th year, carried out a clinical performance that was not in any way diluted by Power’s ill fortune as he completed absolute domination at the Californian venue.

After going into the decider with a 43-point advantage, the 32-year-old ended 127 points clear of Power with Castroneves completing a trifecta for Penske drivers in the series.

Ryan Hunter-Reay, who has signed an extension with Andretti Autosport to 2020, finished fourth ahead of Alex Rossi (Andretti-Herta) who was crowned rookie-of-the-year, Josef Newgarden (Ed Carpenter Racing) and Helio Castroneves (Team Penske).

Pagenaud moved out in the early laps to a clear lead over Castroneves and Power, who lost ground in the first stint on the red tyres.

Power was the first to pit after 15 laps with Pagenaud covering off a lap later as the Frenchman rejoined in front while his pursuer leaped Castroneves for second.

Schmidt-Peterson driver James Hinchcliffe charged from 20th to 13th in the opening 10 laps before finishing 12th.

Dixon had to stop mid-race to replace his earplugs and was the last of the runners classified on the lead lap.