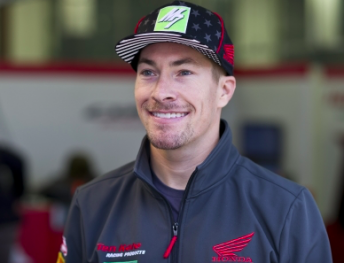 Former MotoGP world champion Nicky Hayden will stand-in for the injured Jack Miller at this weekend’s Grand Prix of Aragon.

The 2006 world champion will ride Miller’s Marc VDS Honda at the Spanish circuit while the Australian continues to recover from injuries sustained in a crash at the Red Bull Ring in August.

Miller has been deemed unfit to compete this weekend after recent medical checks revealed two fractures in his right hand.

The Assen winner was originally diagnosed with a broken wrist and a fractured vertebra following the crash in Austria.

After sitting out the Czech Republic Grand Prix, Miller returned to competitive action at Silverstone earlier this month, but was forced to withdraw from the last round at Misano due to pain in his right hand.

Miler’s replacement will bring a wealth of experience to the squad having contested 216 starts in the premier class before moving to World Superbikes this year.

“First of all I want to wish Jack a speedy recovery,” said Hayden.

“He is a buddy of mine and he is a rider I believe in a lot, so I hope he can get healthy as quickly as possible to show the high potential we all know he has got.

“He just needs to get his body right so he can perform.

“This is an unusual experience for me because I’ve never been a stand-in rider before.

“But I have a good relationship with Honda and when the idea first came up they were behind it and Ten Kate gave me their blessing, so it is nice to go and help out another Honda team.

“For me it just a chance to go and have fun.”

It is hoped Miller will be declared fit to make a return at the Japanese Grand Prix from October 14-16.

“Obviously we’d have preferred Jack to be racing in Aragon, but it’s the racing that is stopping the two fractures in his hand healing properly,” said Marc VDS Honda team principal Michael Bartholemy.

“It makes sense to have him sit out this race in a bid to recover ahead of the three overseas races, one of which is his home race in Australia.

“I’m looking forward to welcoming Nicky into the team and I want to thank Honda and Ten Kate for releasing him to ride this weekend.

“As a former MotoGP World Champion for Honda he brings with him a wealth of experience, which will be critical given the steep learning curve he faces with a new bike, new tyres and new electronics. I am sure he will do a stand up job for us.”