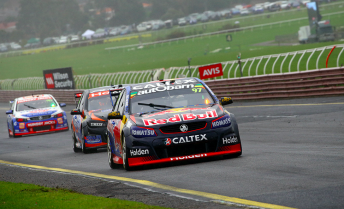 A solid performance from Premat in the opening two stints of the race helped Shane van Gisbergen to a second place finish and the championship lead.

Premat’s signing had been highly scrutinised since it was announced in January thanks to the former full-timer’s mixed prior performances in the category with Garry Rogers Motorsport.

While Premat did not put a foot wrong, all three of Van Gisbergen’s nearest title rivals – Jamie Whincup, Craig Lowndes and Mark Winterbottom – finished down the order after costly mistakes from their co-drivers.

Whincup took the flag 13th after Paul Dumbrell unfastened his seatbelt too early ahead of a mid-race driver change, earning a drive-through penalty.

Lowndes recovered to eighth following an early spin for Steven Richards at Turn 4, while Winterbottom was two laps down in 23rd after Dean Canto came unstuck at the same corner. Winterbottom’s hopes of a second title took a dive

Lowndes is 157 behind in third ahead of Scott McLaughlin, who finished fourth on Sunday alongside co-driver David Wall, and Winterbottom, who has fallen 346 from the lead in fifth.

“I think I did the right job,” smiled Premat post-race.

“I haven’t made any mistakes since I’ve been here three weeks (arriving for Sydney Motorsport Park).

“I love how the team was operating. I feel confident and they don’t put you under any pressure.

“I know there was a lot of discussion about Shane’s championship, but everything is working good.”

“All weekend he did a cracker job, in and out of the car,” Dutton told Speedcafe.com of Premat.

“Gelling with everyone is a major part of being a good co-driver. That can’t be understated.

“On the track, he obviously proved his quality and class.” 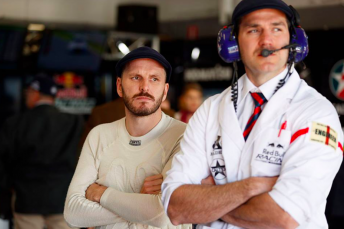 Dutton meanwhile said that the team had to accept the penalty for Dumbrell’s mistake.

Speaking mid-race, the driver described the move as “brain fade that I’ve got to live with”.

“The wording of the rule says that the seatbelt has to be latched until the car stops, and it was,” said Dutton.

“But for years they’ve made it clear with the drivers that the seatbelt can be loosened but has to remain over your shoulders.

“He mistimed it by half a second. He was focussed on getting out and just did it too early.

“It was as simple as that.”

Both Dutton and Whincup admitted that the decision not to pit Dumbrell under the earlier lap 55 Safety Car had already heavily compromised the car’s race.

“It was never the right strategy,” said Whincup.

“The best we could have salvaged from there (without the penalty) was fifth or sixth.”