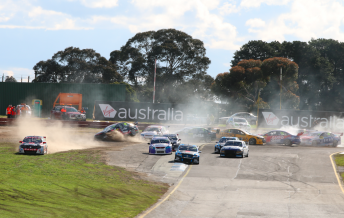 Matt Chahda has been excluded from Sandown’s Round 5 of the Dunlop Series for causing a multiple car pile-up at the start of the second race.

Contact with Adam Marjoram saw an out-of-control Chahda hit the kerb on the inside of Turn 1, which then launched the Albury racer into Bryce Fullwood, Andrew Jones and title contender Jack Le Brocq.

A stewards’ review deemed Chahda guilty of reckless driving with the 22-year-old receiving an exclusion from the meeting and a five-place grid penalty for the next round at Mount Panorama from October 6-9.

“Following an investigation and admission by Car #18 Matt Chahda to a breach of Reckless Driving, the Stewards excluded Car #18 Matt Chahda from Round 5 of the Dunlop Supercar Series and a five (5) progressive Grid Spot penalty was also imposed,” read the stewards’ report.

Stewards meanwhile decided to take no further action against Le Brocq who was involved in two controversial incidents.

The Prodrive Racing Australia driver made contact with leader Todd Hazelwood that forced the pair wide at Turn 1 on the final lap of Race 1, allowing Jacobson through to the lead.

Officials also investigated but took no action over a Race 3 clash with Taz Douglas that resulted in a heavy crash for the Eggleston Motorsport driver at the high speed Turn 6.