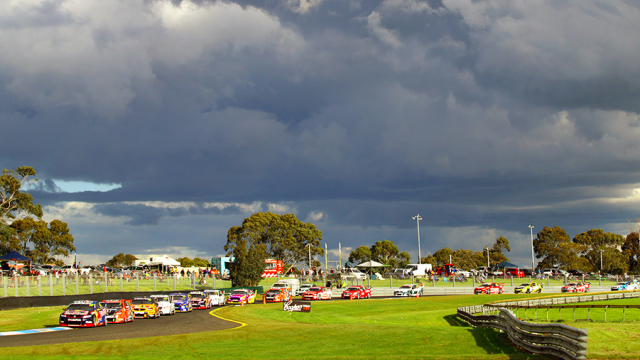 Rain threatens to turn the 500 on its head

Including the Sandown qualifying sprints, Triple Eight Holdens have now won the last nine consecutive Supercars races leading into the 500.

Although easing away from the field in both of the sprints, Whincup says that picking a set-up that will give them the fastest car at the end of today’s enduro will include a large element of luck.

Showers are predicted to hit Sandown throughout the day, throwing a major unknown into the process of choosing car set-ups and strategy for the 161 lap contest.

“Everyone is going to take a guess on what the end of the race will be, and whoever takes the best guess will be in the best spot.”

Regardless of the weather, co-driver Dumbrell expects to start the #88 Holden.

Sandown traditionally sees the co-drivers complete the first two stints in order to get through their minimum 54 laps as soon as possible.

“Obviously the weather is a variable, but at the end of the day you want the fast guys in the car as early as you can towards the end,” he said.

“I would have thought it’ll be consistent with what we’ve seen in prior years.”

Although all cars can make it through on three stops, the combination of the minimum co-driver lap number, soft tyre degradation and probability of rain and Safety Cars leaves little likelihood that anyone will complete the race on the minimum.

The Holden Racing Team’s Garth Tander and Warren Luff will start second after strong showings in qualifying and the two sprints.

Tander, whose form has taken a significant upswing since debuting a new chassis last time out in Sydney, is also predicting a frantic race.

“I think we’ll see variation of what we’ve seen here in the past, because of the soft tyre and the potential for degradation,” he said.

“It will be a very interesting day.”

Tander elected against having a lunge at Whincup in the second qualifying sprint, arguing that second may be the ideal position to start today’s race.

“I’d rather start on the outside of the front-row,” he said.

“If it’s changeable weather, the outside line will be dry from previous races running across it and the inside will be wet.”