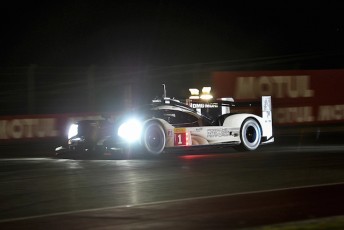 Reigning World Endurance champions Mark Webber, Brendon Hartley and Timo Bernhard crafted a smart victory over Audi in an energy-sapping 6 Hours at the Circuit of the Americas.

The day/night race in Texas saw the #1 Porsche crew claim its third successive victory as it continues its climb up the points standings.

At the flag just 23.6s separated the winning Porsche from the #8 Audi driven by Lucas di Grassi, Loic Duval and Oliver Jarvis.

Earlier in the race the #8 Audi lost the lead when the diesel hybrid became stationary on the track before it was able to reset and start off again, a hiccup which cost it dearly in the end.

The #2 Porsche of Romain Dumas, Marc Lieb and Neel Jani was fourth however their lead in the points standings has reduced from 41 to 37.5.

The #1 Porsche crew have now improved to fourth on 78.5 points with three rounds remaining.

“It was tough racing with fair battles today and Timo’s and Brendon’s drives were awesome,” Webber said.

“After the start we got into a rhythm. In the middle of the race the situation looked stable. The Audis in front were extremely quick in the heat, but this was no surprise.

“But then Audi had a problem and we have been lucky when the timing of a Full Course Yellow played into our hands.”

With just under 40 minutes remaining Webber pitted, handing over to Bernhard for the run home as the German re-emerged with a 20s lead.

A few minutes earlier Audi pulled di Grassi in for a splash and go as it tried to make up track position on Porsche.

With just under two hours remaining the #1 Porsche benefitted through timely full course yellow conditions and pit strategy to take the lead in a pivotal moment in the race as the cards began to fall the way of the Weissach outfit.

Audi’s chances of victory narrowed with just over 100 minutes remaining when Benoit Treluyer (#7 R18 e-tron quattro) speared off at Turn 19 while in second position.

Treluyer was making an outside pass on the #66 Ford GT of Olivier Pla when the cars made contact.

Porsche further capitalised while the race was under the command of the Safety Car by pitting with Webber taking over the helm and maintaining the lead ahead of the #6 Toyota of Kamui Kobayashi.

Webber found himself with a 47s lead over Kobayashi with the #8 Audi of di Grassi third as the race went back to green.

The first portion of the race saw both Audis lead the way as a spirited battle emerged between Hartley and Anthony Davidson in the #5 Toyota.

On the opening lap Webber went on the attack, taking second from Duval momentarily before the Audi driver returned serve.

LMP2 was taken out by the Signatech Nissan-powered Alpine driven by Gustavo Menezes, Nicolas Lapierre and Stephane Richelmi.

The WEC moves to Fuji for Round 7 on October 16.