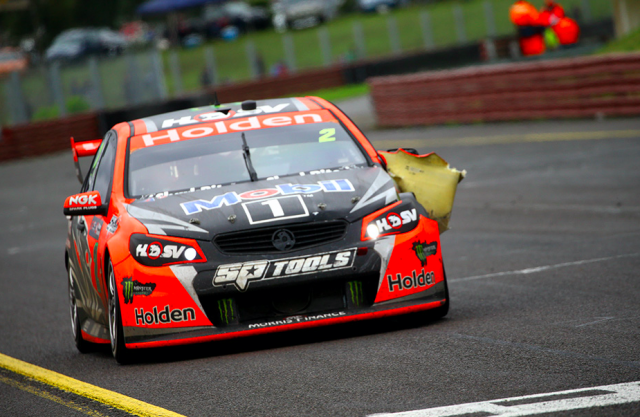 Tander held on to take the flag just 0.3s clear of a charging Shane van Gisbergen/Alex Premat Holden after 143 of the scheduled 161 laps.

The HRT Commodore’s front-left guard had blown apart on lap 122 which, while deemed safe by race control, left Tander struggling for speed in the dying laps.

The win is veteran Tander’s maiden Sandown 500 triumph and his first Supercars race victory since Townsville, 2014.

Will Davison/Jonathon Webb held off Scott McLaughlin/David Wall despite an engine problem to secure the final podium spot, ahead of Chaz Mostert/Steve Owen and Fabian Coulthard/Luke Youlden in the leading Fords.

Luff put in a sterling performance against his fellow co-drivers at the start, leading the majority of the way through the opening two stints.

The early running took place in dry conditions before a shower dragged the bulk of the field to pitlane for wets on lap 37.

Starting Whincup’s Holden, Paul Dumbrell eventually got the better of Luff just before another downpour saw Dean Canto (in Winterbottom’s Falcon) in the Turn 4 tyre barrier on lap 55, triggering the second Safety Car.

Dumbrell was among a handful not to pit while Luff dived in to hand over to Tander, who rejoined seventh and with a fuel advantage over the Red Bull Holden.

Tander caught Dumbrell in the third stint before the Holdens pitted together for slicks on lap 74 – the HRT Commodore rejoining with a healthy gap thanks to a shorter fill time.

Whincup took over from Dumbrell but quickly saw his race fall apart with a drive-through penalty for his co-driver removing his belts prior to stopping in the pit box.

McLaughlin, who had been among those to shadow the Tander/Luff strategy, then emerged as the HRT’s biggest threat, passing Tander for the lead in the fourth stint.

In an intense battle, McLaughlin, Tander and Van Gisbergen ran line astern before the HRT pulled its driver in on lap 104.

Tander took the lead back when McLaughlin and Van Gisbergen pitted a lap later – McLaughlin dropping to third when he ran off at Turn 1 on his out-lap.

Former champion Tander was able to hold the lead to the end despite the guard issue and the best efforts of Van Gisbergen, who ran out of time to steal the victory.

Further back, Mostert and co-driver Owen scored fifth despite losing time double-stacking behind the Super Black Ford at the lap 55 Safety Car.

Coulthard and Youlden were sixth after an off-sequence strategy required a late final fuel stop while leading.

Seventh for Todd Kelly/Matt Campbell marked a fine debut for the Carrera Cup ace, while Craig Lowndes salvaged eighth after an early mistake from co-driver Steven Richards buried the Caltex Holden back in the pack.

The star co-driver had been Richie Stanaway, who masterfully drove the Super Black Ford up to third in the second stint while on slicks in changeable conditions.

Canto had also been on slicks when he went in the fence, putting Winterbottom’s Ford two laps down in a major blow to the reigning champion’s title hopes.

The Lucas Dumbrell Motorsport Commodore of Nick Percat and the returning Cameron McConville finished ninth, while the top 10 was completed by the Rick Kelly/Russell Ingall Nissan.