Cameron Hill relinquished his Toyota 86 Racing Series points lead after being issued with a 50-point penalty and a $5,000 fine for causing an avoidable incident at Sandown.

Hill, who has dominated the new one-make championship, received the sanctions after clattering into the side Tim Brook at Turn 1 in Saturday’s second heat.

The move, which eliminated title contender Brook from the race, saw Hill cop the fine of which $4,000 is suspended until the end of the year.

The 50-point penalty has dropped the Australian Formula Ford Series winner to fourth in the standings, 78 points behind Will Brown.

David Sieders took the honours in the series’ final race of the weekend held in wet conditions.

The V8 Utes regular took the lead on lap four when he slid underneath Aaron Seton at Turn 1.

Seton, the son of touring car legend Glenn, held sway in the early stages having jumped ahead of pole-sitter Luke King.

In the end, Sieders took the win by a second from Seton with guest driver Steven Johnson in third.

Brown scythed his way from ninth to fourth ahead of Jake Klein, Josh Hunter and Brook, who stormed from through the field from 29th on the grid.

Hill, Dylan Gulson and Leanne Tander rounded out the top 10 as a spin for King dropped him to 27th position.

Two-time Bathurst 1000 winner Tony Longhurst was 13th on his final guest appearance of the weekend.

The series heads to Mount Panorama for the penultimate round from October 6-9. Will Brown claimed the fifth round of the Australian Formula 4 Championship by taking victory in the final race at Sandown.

The Team BRM driver made no mistakes in wet conditions as he stormed into the lead on the opening lap from second on the grid.

Rowe, renowned for his skill in wet conditions, piled the pressure on Brown before the Safety Car was deployed after a huge shunt involving Josh Denton and Josh Conroy on the second lap.

Denton collected the inside barrier at Turn 4 on the opening lap damaging his front wing, which triggered the crash on the following lap. 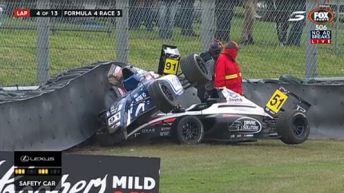 The wing became lodged under his front left tyre which forced the Team BRM driver and Josh Conroy wide and into the barriers at the high-speed Turn 6.

The impact saw Denton’s car climb on top of Conroy’s as the pair were buried in the tyre wall.

Both drivers walked away from the incident while the field circulated under the Safety Car.

The tyre wall required an extensive repair which in the end saw the race finish under caution.

However, confusion reigned as to the identity of the victor as Brown attempted to enter the pitlane as yellow flags flew, dropping him to eighth.

The Queenslander aborted his pit entry at the final minute and he then proceeded to overtake the field to resume his spot at the head of the field.

After much deliberation the results remained with Brown taking the win from Rowe, Love and Hayek.

Brown has opened up a 35-point lead over Rowe heading into the final round on the Gold Coast streets from October 21-23.